Today was a pretty slow day for me, I did some cleaning up in that good ol' first life, and I've been spending more time with my poor, attention starved fiance. So if you guys were wondering why the posts have been a little slow, blame the first life :)

Today I was sitting with my dear friends Kricket and Candy (talking about the Harry Potter book) and me being the putterer that I am I found myself editing and improving the area around us. It was time that the lucky chair pit felt the magic wand of sculpted prims as well... *cue glimmering sound effects* 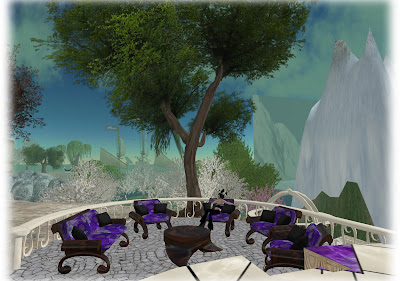 Delicious sculpted furniture, but I didn't change the table... I'm rather fond of it, actually! I got rid of that texture railing and put in a real one, after all, I do have half a sim to play with. But I wasn't that flippant with the furniture, they're actually pretty modest, about 13 to 18 prims each. It's been suggested that I sell the furniture (and my trees), but something tells me I need to have more than just one or two variations of it before I sell any of it.

The jester's hat has become quite a big hit actually, and people who wear them have ended up with the nickname of jingle heads :) It's all in good fun, naturally!

Illusions has also almost reached a milestone! Apparently my update group has reached almost 200 members! I've offered up free harlequin caps as a gift to the members who refer their friends to help me reach that nice round number!! I was at 196 last time I checked, but IM me if I go over and I'll be happy to give you and your friend your hats ^.^ It's amazing and almost unreal to me... that there are two hundred people out there that want to know the very second I release something new. I'm pretty sure that back in February I only had 80 people, and I was stuck at that number for a very long time.

I'll be planning another party soon, and this time I think I'll have to take a page out of Linden Lifestyle's book! I'll be making a group with a member cap on it equal to the sim's capacity, and have the party be limited for the first hour to only members of that group. I might even do the prim and script limit too, but I don't think it'll come to that. I was just so blown away at the attendance and enthusiasm for the Midsummer Night's Dream Masquerade, and all of the IM's I got from folks worrying about getting in because the sim was full... So I'd like to avoid that for the next time if I can :) I'll figure out more info and share it when I figure more things out ^.^
at 10:30 PM