A New Generation of Ears: Your Picks!

The results from my survey are in!  I'm very pleased to say that I will be able to make a good amount of you happy with the ones that were picked, because a couple of designs stood above the rest.  The results made your preferences crystal clear, and the ones I had to make were obvious.

To those who missed having my smallest ear, I'm pleased to say that the size labeled "Vulcan" did very well, with almost 60% of the respondents saying they wanted to see them made! 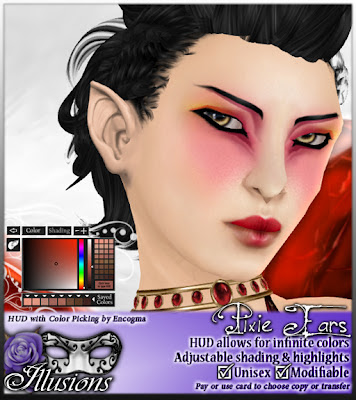 It's true that sometimes subtle is best. These sweet little ears will only barely poke through your hair, and are just a tad larger than normal ears. They're a great option for if you're displeased with the ears that came with your skin, or if you'd like to roleplay as a half-elf or Vulcan.  The reason I excluded them from the original six was that I was having trouble making the same base mesh that made ears like the drow and elfin as small as I needed it to be.  But since I found out it would be worth the trouble, I managed to compress it down into the pixie size that you know and love.  I think the shape turned out great!

However, the true star of the survey results was one that got everyone excited.  From a rough concept submitted by Aiorii, these blossomed into being chosen by an overwhelming majority.  With a full 40% making it their first choice out of seven, I just had to make the curly tipped ears! 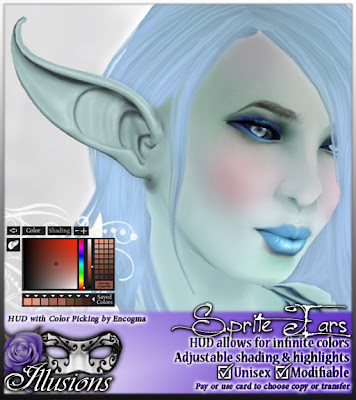 They have come to life! These ears are just adorable, with a good helping of whimsy and playfulness.  It was quite obvious they were a hit and I just hope I fulfilled your hopes and expectations.  With so many people feeling passionate about seeing these made, I felt a bit nervous!  Luckily for me though, the shape came easily and turned out to be the one that gave me the least trouble.  I love how they came out, and I've been wearing them around my build spot feeling so cute.


But, now for a twist.  I said that I would only do two styles.   I said that, but what the survey results told me is that you guys really were hungry for more.  Two other styles did very well, the long "Fae" ears had a good number of responders, and the absurdly long "Poison" ears seem to have an impassioned following.  Using my brain thing, I realized it wouldn't be too difficult to reconcile these two shapes and merge them into one amazing super shape. 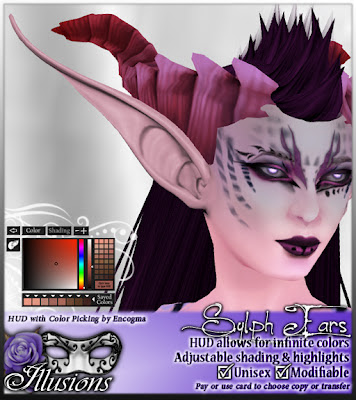 People just kept wanting longer and longer and so here you are!  I built these alongside the old poison ear to compare and align them so everything you loved about the old ones will be reborn.  They're just as large and have a similar angle, but have a dramatically better shape.  While my sketch of the Poison ear had a downward curve, I brought the dip and upturned tip in from the fae style.  The long trail keeps the shape feeling delicate and realistic and kept it from being too unwieldy.

These are the last of the basic elven ears I'm planning on doing.  I haven't ruled out, however, doing a few completely new ears.  As I mentioned before, people seem to be really excited at the prospect of semi transparent finned mer ears, or torn and chewed up elf ears.  If I do those, they will not be in the same glorious spectrum of shapes and will mostly likely be in just one or two varieties each.  I just have to decide if I'm going to start doing jewelry first or after!  But don't worry, jewelry is definitely going to happen.

Vote on your favorite ear shapes!

Yes, I'm still going on about ears.  I've read over your suggestions, pored over your pictures, and I've put together some concepts based on your ideas!  The results are ready for your viewing pleasure.

Come vote on what you'd like to see made!

A lot of people have also suggested and re-affirmed my suspicions: that you guys really want torn up ears and mer/dragon ears!  I'm thinking I might do two sets of each, since I love round numbers.  Twelve sets of ears is ambitious but makes such a nice, complete sounding number...
at 10:41 PM No comments:

Friends, lend me your ears!

With my set of six ears all done, I know you might have a hunger for more, which is why I want to hear what you want to see!  Before I start doing accessories, I want to make sure I'm not missing any shapes.  So, I am looking for your ideas!

I'm looking for ear "shapes" rather than "types". An ear type might be a mer-person ear, torn up ear or something like that. While those sound awesome and I do hope to get to those, they can't be a part of this set due to needing entirely new base meshes, UV's and texture sets.  So what I'm looking for are shapes, variations such as being wider, longer, curved, or pointed etc.  Send me pictures or drawings of elves and creatures that have ears that just make you happy, and feel free to sketch out some yourself!  As long as the concept is discernible it doesn't matter how good you are at drawing it.  I'll take the suggestions and make concepts of my own based on the ones sent in, and then put it up for a vote.  The top two ear shapes will get made!  And then I can get going on earrings, chains and all that yummy stuff you want to perforate your elven lobes with.  Since I don't want to delay too long on getting accessories out, I'm going to make the deadline for concepts Wednesday the 9th.  You've got a week, show me your ears!
at 2:08 PM 5 comments: