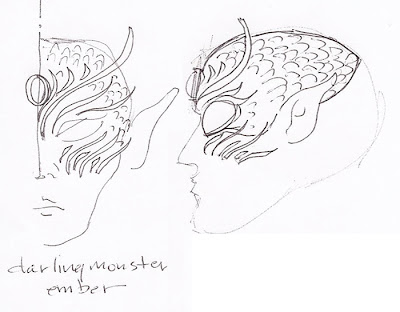 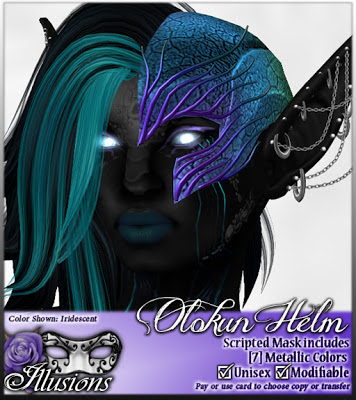 I know this is the moment you've been waiting for.  The release everyone who's bought my elf ears or eyeballed my elf ears has been eagerly/idly/passionately/rabidly longing for.  I have to say though, it's been hard won.

Let me tell you a tale of an item that was truly cursed, to the point that even now I wonder if it will jump from the vendor it's been neatly packed into and bite me.  It begins with a belligerent failure to upload, and ends with my having to reinstall Windows.

First, I'll share with you what I'm talking about, which, despite having some special form of creator's post traumatic stress disorder from it, I have to still look objectively and realize it's beautiful.  Beautiful like a psychotic macaw trapped with you in an elevator, beautiful like an icicle falling from a roof onto your head, or perhaps a nuclear explosion. 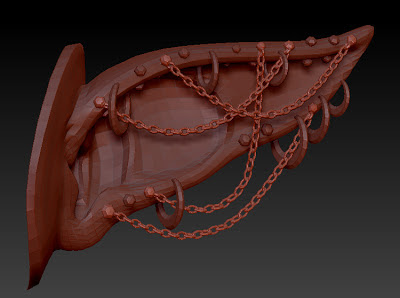 They look so innocent at this stage, so allow me to put what I've had to do to finish these into writing.  It may sound like griping, because it is, but at this point I feel that I've earned the right.

For every set of earrings, I must make nine versions of it, each fit especially for the nine sets of elf ears.  For earrings and chains, I made six elements per style, totaling fifty four different objects I need to make.  That's okay, I put on a show and grind through them in Zbrush, perfecting the shapes and then giving them UV's, and finally bringing them into Blender to convert them into collada files.  I give them their material groupings, then start uploading them to Second Life.  Pixie, fairy, seelie, high elf, all work as expected and I work my way down the list until I hit the last set.  And, just as if I'd suddenly hit a monstrous pothole, this is where the axle breaks and all of my progress is halted.

Eight out of nine sets have uploaded fine, but the sylph earrings... for some reason I'm getting a persistent upload error.   So, I start dissecting it.  I've been uploading the earrings all together in a neat, easy to fit package but now I tear it apart.  I attempt to upload the chains in every which way I can think of, even individually.  The earrings upload fine, but now the chains are giving me a MAV Block missing error.  Some quick googling shows me that no one has a clue what this is.  Some more persistent googling finds me a possible solution: it's supposedly caused by material groups having a problematic amount of triangles.  Okay,  I'll add a cube to the mesh, make it tiny, and assign each face of the cube to a material on the chains.  Now, to try uploading it again to Second Life... no MAV Block error, but now it's giving me the generic error message again.  I ask my creator friends what might be causing it, some of them suggest it might be an issue with the physics shape.  I make myself a simple cube physics shape and try to upload it on to the beta grid.... and success!  Sweet, sweet relieving success, I'm so close, but too tired to go on, I'll take a break.

Coming back the next day, I log into the main grid and start to upload the earring sets.  They're working fine but the moment of truth comes... will the Sylph set work?  I browse to it, open up the file, calculate weights and fees, no error, hit upload and...

Second Life crashes.  Wow.  Okay, this is crazy.  Seriously?  Log back in, try again, upload and... crash.  Maybe I should re-install, maybe do a clean install to be sure.  I delete my Second Life client and start again with a freshly downloaded, up-to-date client.  I start it up, hit upload model, and for a second the browse window appears before it's suddenly replaced by the dreaded, vibrant blue and the finality of a Blue Screen of Death.  My computer has completely crashed, and has to be restarted.  I reboot, log back into Second Life, and try again.  Another Blue Screen of Death.  I follow the error message to see if I might be able to fix it, it's a BIOS error, but my BIOS doesn't allow me to configure the elements it says are the problem.

At this point, I'm desperate.  I'm thinking like a mad woman, if there's rot in the system DIG IT OUT.  BURN IT.  BURN IT ALL.  I back up my documents on my second disk, reboot from it and format C:.  I re-install Windows.  My C: drive is as clean and as pure as freshly fallen snow, and I get to work on re-installing things including Second Life.  At this point, it has to work, doesn't it?  I start up Second Life, I browse to the ears (that works!), I hit calculate weights and fees (that works too!) I hit upload and SL gives a weary cough and crashes to desktop again.  As I rant and rage to anyone that will listen, a kind soul suggests I try another viewer.  I download Firestorm, install it, run it, and what do you know.

Now you might finally understand why there has been such a long delay in releases.  I still have more commissions to release and finish but this project has been so infuriating, so frustrating and so demoralizing I haven't had the heart or drive. I had motivation only through stubborn spite to throw myself against the solid steel, spiked wall of futility.  I've worked on challenging projects before that never seemed like they would end, as more and more would pile up on it so that finishing it seem a Sisyphean task but I've never had a project so beloved to wicked and malevolent tech gremlins as this one.  Honestly, the only thing that kept me coming back to it is knowing that I'd love it, and you'd love it, once it was done.  And that you guys probably would keep bugging me about it until I finished it.

So finally, now that you've read my rant, or skipped over it, I'll deliver the reveal I've held hostage. The Mystic Chains are the spiritual successor to the Mystic Earring set from my first generation of ears.  Elegantly draped from posts, each ear style has their own set of four chains for each ear.  They're scripted to include my usual six metals, including sterling, antiqued and tarnished silver, and gold, copper and bronze.  They also have a nifty ability to have chains of your choice go invisible, so if you'd like to wear just a few of the chains, or two on one ear, three on the other, you can customize it without needing to fit individual chains.  If your ears have been made smaller or larger using the hud, you can just select the two earring objects and stretch them down to fit.

I was commissioned by Kaelis Ember to make a set of lunar themed earrings for the elf ears.  She described a set similar to the mystic ones featuring half moon earrings. 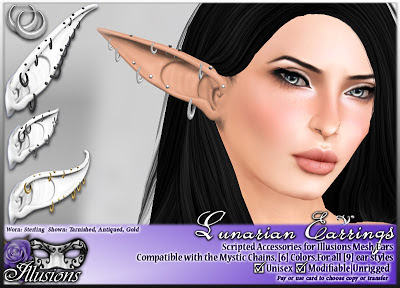 The Lunarian earrings are also scripted to have six metals, to match the chains.  I wanted to make sure that these moon ones would look perfect with them.  To achieve that end, I built them together, so they work in harmony with each other.   When fit properly, the chains swoop gracefully through the loops, the posts line up and they don't clip through each other.  It's my intention that other, future earring sets I create will also line up with them to facilitate mixing and matching.  I want you to be able to customize your ears the way you want them! 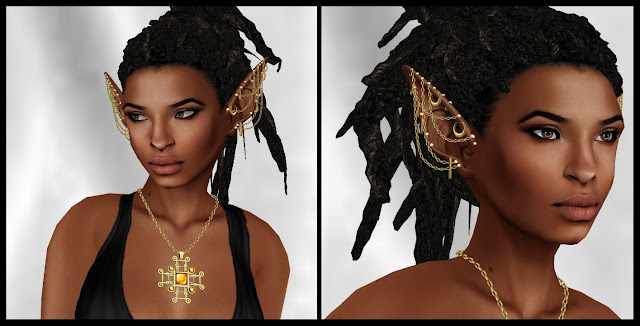 Let me just say I'm relieved and happy that they're finally done, and I hope you enjoy them.