Since the gods are returning, the next mask in my series is Bast:

I'm happy to present the Perfumed One, reincarnated as is only appropriate. Another special edition, this mask will not be limited and it is the same premium rate as Anubis.

The goddess known as Bast evolved over many years and went through different evolutions across the two kingdoms of Egypt. She evolved as a lion headed goddess, separate from Sekhmet, but as cats became increasingly popular in homes she evolved into a cat headed goddess. She was seen as the protector and defender of the pharoah, and guardian of Lower Egypt. With her strong association with the sun and her patronage over the Lower Kingdom, she became more and more tied with Wadjet, the winged serpent goddess.

All of these things I took into consideration when creating her. The sun disc is of course one of the most easily noticed symbols, but here are a few others:

• She bears a Uraeus (snake) on her headpiece, due to her ties to Wadjet. There are serpents framing her sun disc and center medallion as well with the stripes forming Wadjet's wings.
• The hieroglyphs around her medallion read: Bast, Lady of the Flame, the Perfumed One. Lady of the Flame was her title relating to her role as a solar goddess, while Perfumed One was a role she later took up when she became a goddess of ointments and salves.
• Her medallion is an ankh, a solar symbol and one she is often depicted holding
• The flares on her mask are meant to evoke a lion's mane. Sekhmet was often shown with a ruff of fur meant to define her as a lion rather than an ordinary feline.

Like Anubis, she is scripted to change texture. The metal, the stripe accents and the gem all change, even the metal tips on her wig. The sun disc changes as well, so you can coordinate.

Of course, she looks wonderful without it too... 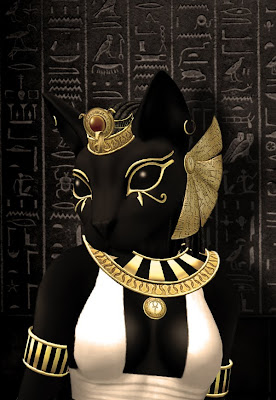