When mesh first went into beta, I wanted to give it a try and see what I could do with it. The first thing that came to mind was a volto mask, because I have never been happy with my attempts to make a full face mask with sculpts. I had a lot to learn.

For about eight months all I did to play with mesh was mess around with a volto. I made literally dozens of them, starting over and over again until I could sculpt a pair of decent lips in just a few minutes. Every time I did, I learned a bit more about topology, how the polygons could work together and what to aim for.

The evolution of my topology, from left to right

You can see how the picture on the left has a lot of points and lots of "snags", parts where the lines aren't neat squares. That's the sort of thing that would get ugly if you tried sculpting on it, and would prevent a smooth and consistent surface. I finally got the hang of getting rid of those and managed to figure out how to make neat loops and keep my detail where I needed it most.

So believe me, this mask has been a long time coming. 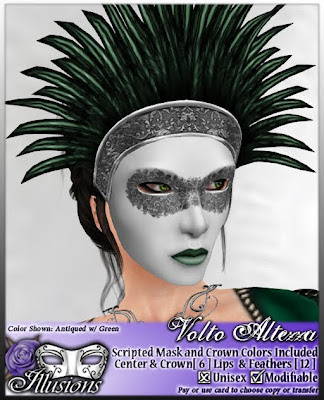 After so much tweaking, revisions and refinement and then finally another round of neurotic scrutiny, I am very proud to share this mask with you. The Volto Altezza is an ornate and elegant visage, with a proud crown of coque feathers. Altezza is Italian for "loftiness", and "sua altezza" is an equivalent expression to "your highness". With the refinement and detail of the delicate metal work, no one will doubt that you're worthy of the title.

We can't have a fine lady without an escort though, and so a worthy gentleman had to be produced. 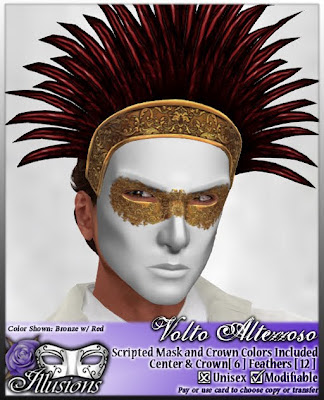 The most notable difference aside from the features is that he doesn't have customizable lips. I found it just far too feminine on him, so I hope you'll find the feather crown enough color. Speaking of, I've made the mask and crown separate. If you like, you can wear just the crown or just the mask, and I've even included an option for just the crown with no feathers if you want to wear something in your hair.

For the first time, I used Photoshop brushes as alphas for the details on the crown and center mask. I had to, to achieve the detail and intricacy I hoped to. I'm happy to credit the incredibly talented Coy Dreamer. I used selections from her Decorative and Floral sets as imprintable patterns on to my high detail model. I doubt I could achieve such a beautiful effect without her efforts.

When you try to create a neutral, beautiful face, it's amazing how much of a challenge it becomes. There are so many little details that our minds are especially attune to being able to detect the slightest error in, and they end up needing scrutiny and heaps of patience to fix. After all this time I'm finally happy with my work, and I have something I can be proud of for hopefully a long while. I hope to use this mask a base for other patterns and variations in the future, and I look forward to seeing where I end up next. 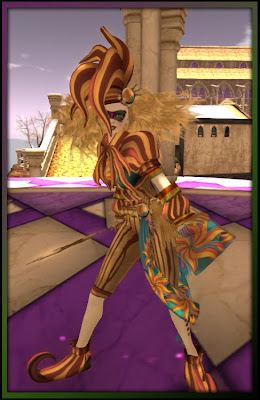 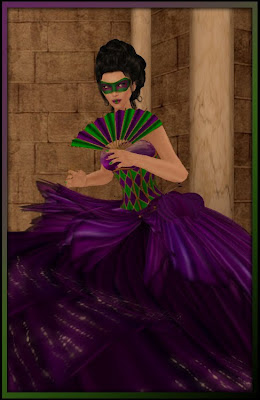 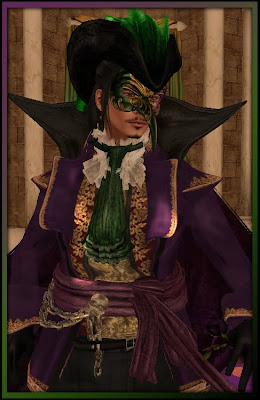 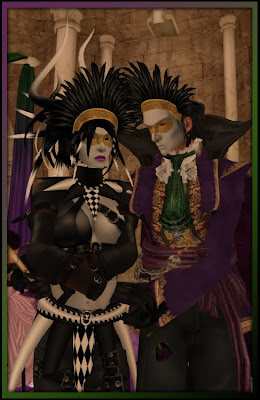 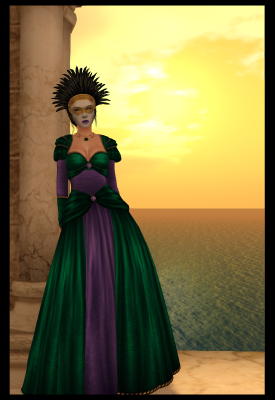 I'm making up for lost time, can you tell? I'm on a roll with traditional Venetian masks and I'm absolutely loving working with unrigged mesh. Weight painting and rigging is another matter, but I just can't get over the freedom and flexibility I now have for masks!

While I was working, I watched one of my favorite movies: The Imaginarium of Dr. Parnassus. I knew immediately which mask I had to make next. 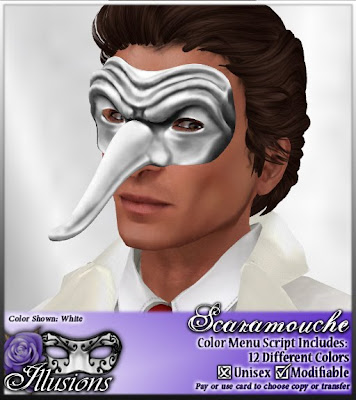 The Naso Scaramouche is another classical Commedia Dell'Arte style of mask in the same vein as the Naso Turco. Like many traditional carnivale masks it's based off of a character: in this case, Scaramuccia or Scaramouche. His character was a dashing lady's man who was clever and witty, and always ended up turning tricky situations into an advantage. Scaramouche was first and foremost a comedian and was always well received by audiences.

For this mask, since I wanted a lot of detail but not to tax people's systems too much, I'm experimenting with it being only one sided. That means in the back it's transparent, like a plane. This is just an experiment, so please let me know how you feel about it not being able to be enjoyed "360°" like my other masks.

I had quite a bit of trouble getting the texture to a point I was happy with. I wanted it to be rather matte like papier mache, yet I couldn't get it at a point that looked crisp, matte, and had enough contrast to be interesting. I finally got it to a point that I'm happy with, but it may not be as luxurious and amazing as the rest of my textures :)~

So, only one thing needs to be asked. If you buy this mask, will you do the Fandango?

Time creeps up on you, and before you know it it's the most important day of the year. Anniversary? Birthday? Christmas? No! Mardi Gras! 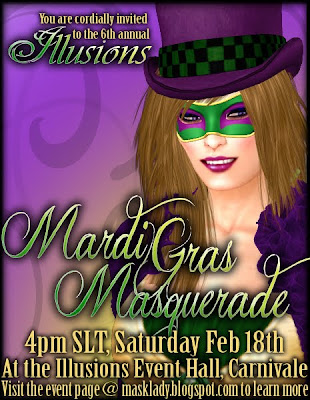 Can you believe this will be my sixth annual Mardi Gras masquerade? This year, I've decided not to do my usual "event group". So there is no need to join anything, if you can come, come! There will be a free mask for the party (shown on the invite), prizes to be won, as well as exclusive event masks to be unveiled and awarded to the two people with the best outfits. The theme, as always, for Mardi Gras is purple, green and gold. Please also keep in mind that my sim is rated General, rather than Mature, and think Venice, not Rio. Because how often do you get an excuse to break out the ball gown and tuxedo and truly dress your best? Just please, when planning your outfit, keep an eye on the following so that we can all have a relatively lagless experience:

Check your Avatar Scripts
This info can be found in Place Profile->About Land->Script Info->My avatar. Check the list to see if there's any scripts you're wearing that you could delete from copiable items or remove, such as HUD's, resizers, invisiprims (switch to alphas!) etc. Your total script memory total should be as low as you can get it, under 100kb would be ideal.
Keep your prim count low

In the past I've had a solid guideline for this of 200-250, but this year with the new prim equivalency it makes things more muddled. For this party, I just ask that you leave the extra fluttery petticoat layer at home, and not wear the 256 prim wings with your alpha flexi hair made of 180+ prims. Remember, you're going to be on a sim with a lot of other avatars and please dress as if you were going to the classiest expo ever.

I've done my best to do my part at the Event Hall by making it secluded from the rest of the island, and keeping the number of unique textures, sculpts and resolution down as much as I could while still providing an elegant venue. With a collective effort we can all enjoy everyone else's outfit as well as our own, and not end up dancing with gray ghosts.

Alright, enough technical talk. I have music to find for my playlist and masks to make! I hope to see you at the Masquerade, don't miss it!
Illusions Mardi Gras Masquerade 2012
February 18th, 4pm SLT
Held at the Illusions Event Hall on Carnivale
Costume contest winners will be announced at 6pm SLT
at 2:07 PM No comments: