The 17th is my real birthday (as opposed to my avatar's birthday which I've sadly forgotten two years in a row, now).  So, to celebrate, I've set my vendors to offer double Angel points on all purchases!  If you have an Angel card, wear it while purchasing any item in the store (excluding the bargain basement) and it will give you 20% back as points to spend on any other item in the store.  For example, purchasing an item for 500L with your Angel Card worn will give you enough to get a 100L item for free!  When redeeming your points, just side click the vendor and select "use card", and the vendor will treat it just like cash.

If you don't have an Angel Card, you can just pick one up in the atrium right next to the new releases for 0L.  No excuses to miss out on the chance to pick up something you've had your eye on!  The vendors go back to normal at the end of the day, June 18th.

Illusions in the Mesh Around Hunt!

I was approached by BellaStarr of the Ego Company a little while ago about a new hunt for only mesh items.  Normally I turn down hunts as I haven't had much luck with them and don't like to dig up the time to make an item.  But, since so many people are still shy about mesh I felt it might make an impact to show them how familiar and easy it can be to wear.  Rustling around my mesh work-in-progress folders turned up my lovely top hat that I made as a doodle, released as a holiday freebie and then never finished.  Part of what was hanging me up was a mix of wanting to work on other things, but also never being quite happy with the textures.  It was the perfect thing to pick up and give a bit of spit shine to. 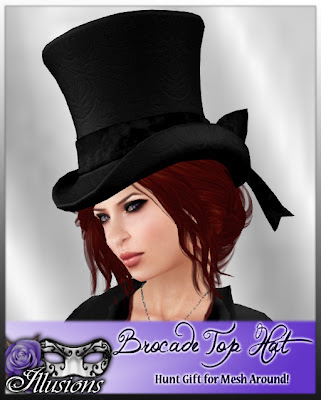 The brocade top hat is an experiment with a new feature of Zbrush that allows you to use "Surface Noise" to create patterns and effects across the entire surface of your object.  While I'm not sure it's an entirely convincing brocade, I have to admit the pattern does seem to have worked pretty well and hopefully it's a technique I can use more in the future.  The hat only comes in black for now, I might later polish it up a bit more and play with the shading to release it in the store.  I especially love the velvet ribbon and how that turned out, it looks so soft and pettable!

You can find it for free hidden somewhere in the store.  The clue is M is for Murder.
at 5:53 PM No comments: