If there is any other time of the year aside from Mardi Gras that keeps me busy, there's no doubt it's Halloween. With the jewelry expo coming up in almost a week, Halloween in a month, I need to get the many things I've been sitting on out from under my butt and out onto the walls of the store.

My last post was about the Goblin Masque, but how could I expect you to show up all gobliny if I don't give you something to work with? The next masks and accessories I release (exempting the new jewelry for the expo) will all be something you could wear to the masque! 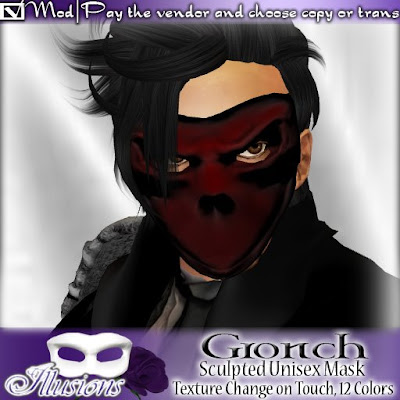 This is a much darker mask than I normally make, obviously. I think my favorite part about it, is that its asymmetrical. I noticed when I changed my head angle in my AO, turning and shifting its position changed its expression completely, so one moment it was giving you a devilish eyebrow, the next it was giving you a grim and solemn look. It's extremely versatile and looks good on women and men. I also strayed a bit from my usual pallette of rich true colors, to give it darker, grittier and more washed out look. You can see the colors when you try the demo :) 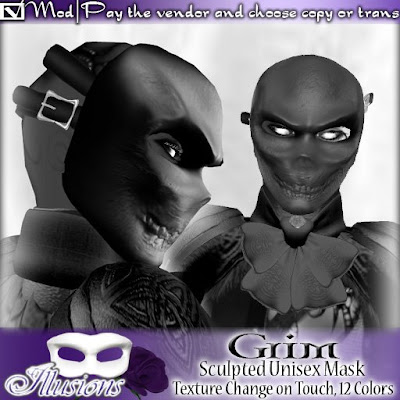 Again, a very different mask from my normal repertoire. Who would have thought I had it in me! This one was very tricky to get right, but inspired and egged on by my friend Melly she pushed it to be what it is. Apparently this mask is kind of from a movie called Army of Two. Kind of, because Melly showed me a picture and told me what she liked about it, and then I took it and what I liked about it, and as usual made it my own. I wanted it to seem less like a mask than another face almost, sort of like your entire head. The mask has the same sort of dark, muted pallette of colors as Gronch, and they look great with fantasy colored skins. The buckles I put on for myself, and then realized they looked so good I'd keep them. The best part about them is that they work seamlessly with hair, so that anything other than the shortest of short hair or mohawks will hide them perfectly. 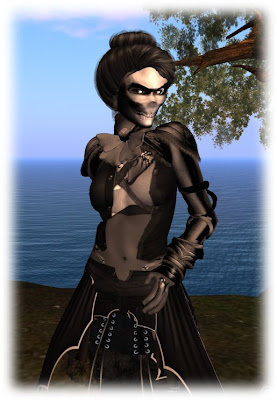 Auntie Siyu is coming by for dinner!

A long time coming, and actually originally intended for summer, there is one time the creatures and animals and dark unseelie fae can creep out from the shadows. The Goblin Masquerade... 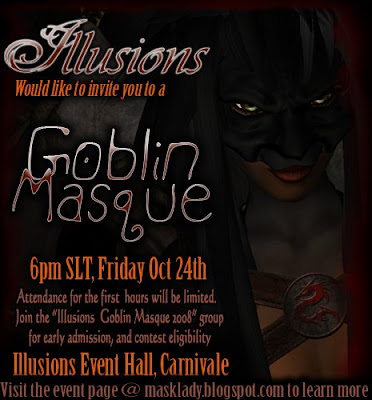 Start getting together the trappings of an arcane and whimsical being of the underground and underbrush. Shop for the glistening wings of a flittering creature that steals socks or tips your cup over! And make sure you save the date, I only apologize for not getting it to you sooner.

The theme is that of the dark fairy, the unseelie, the spirits of the underworld and the sprites of the dark places. The animals that hide in the woods and the creatures that frolic when the moon is gone and the sky is dark!

While picking your costumes out though, please remember the rules from the last masquerade. They're put in place to ensure that everyone can enjoy the festivities, without swimming in soup.

Streamline your AO, or leave it at home
Nobody likes looking like a noob while being a wallflower. However, if you don't plan to dance, fill a veritably lag free, low prim ZHAOII with your two or three favorite stands. You don't need a walk or any other anim if you're not moving. Otherwise, just go without.

No particles, and no listening scripts
Turn that bling off, and make sure you don't have any items on you that respond to chat commands. Try to avoid scripted items at all if possible.

As always, there will be a costume contest, determined by vote, to vie for the title of King or Queen of the Goblins. Two unreleased, themed masks will be awarded as the prizes, along with 1500L each. I will also have the 150L fee to join the Masque group raffled off to the members, the winner receiving 5000L. I will also have an item raffle ball, giving out items from my store!

Make sure you join the group early, do not put it off because you don't have a group slot. Spots will go surprisingly fast, and I will refuse to add a single soul more than 50. I will, however, have a waiting list just in case anyone leaves the group, which has happened before. There will still be hope to get in even if you hear about it too late.

Masks are required, but a freebie mask will be included, which is the mask shown in the invite. I know the costume rules are tough to follow, especially when it's so tempting to go for the excess, but I have the utmost faith in your creativity to be able to work around the limitations, and flourish. I can't wait to see you there.

The Face of a Dragon

There is something I've always drawn, since I was six or so. I drew a few happy houses with sunshine and my family, or maybe a kitty (oh I drew lots of kitties), but there was one thing I drew, for as long as I could use a pencil. Dragons.

As I grew up and kept doodling through class, they evolved into a certain shape. In fact, just for yucks, here's one of my drawings from when I was thirteen! Awww little thirteen year old Siyu.

So anyway, grown up Siyu plucked the idea that was always so clumsily rendered in two dimensions, and gave it one more. Finally, with Zbrush and SL, I was able to create my vision of a dragon, or at least just that lovely face. 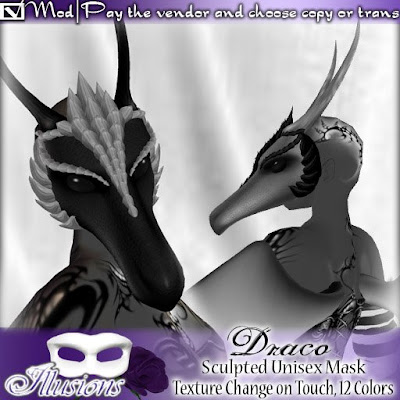 One of the first masks I made (I think it was my fifth or sixth) was a dragon mask, which was really absurd compared to this. Evolution seems to be a theme lately...

But for the more technical side of things, the mask changes color on the face and horns, and on the scales, so you can make any variety of color combinations that you like. Blue face, orange scales? Can do! Want to prance around like a My Little Dragon? Pink scales and a white face could be your option. All of the colors are very expressive and rich. I also made two fits for this one, one for wearing bald (as in the picture obviously) and one for wearing with hair. The only difference is in size and position. The skin is a new release by Selos (of Trap, next door), but the black and gray version isn't for sale quite yet. I only have it because I pestered her for a monochrome version.

Speaking of Selos, she popped it into my head to create a matching one, from the other side of the world. 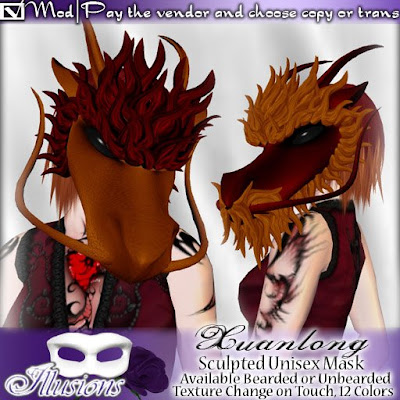 Xuanlong in Chinese means "Black Dragon". Technically he isn't black, but he can be, since he shares the same script that changes the color of his "scales" and his face. He comes with or without a beard, which is traditional while the beardless version isn't. I just like a clean shaven draconian chin *strokes*.

The rules for creating a Chinese dragon are actually incredibly precise, and there's a whole series of symbols and numbers involved in creating them. To the Chinese, dragons were the embodiment of the "Yang" concept of male energy, as well as the five-toed dragon being the symbol of the imperial family. In fact, if an artist not especially commissioned by the emperor dared to draw a five-toed dragon, he could be executed as a traitor. Three-toed dragons were considered appropriate for common people, while four-toed dragons were only for nobility. Not only were the number of toes of incredible importance, but even the number of scales. A set of auspicious numbers relating to yin and yang combinations were used. For this reason, the bearded Xuanlong has 117 prims, which is 81 (9x9 being very lucky and a Yang number) + 36 (9x4, a Yin number). Since the beardless Xuanlong isn't traditional, I didn't bother watching my prims as closely.

I know it's been ages, longer than it's ever been, since I released something. So I want to thank all of you for hanging in there, and being so patient while I've been so unproductive. Enjoy, raaawr :)
at 12:10 AM 2 comments:

Alright, yes, that was a little longer to wait for an update than it should have been. You can partly blame Will Wright (praise be to Spode), but also the effect of time inertia on blogging. The longer you wait between entries, the more important you feel your returning blog entry should be, and so it becomes subject to procrastination as you keep hoping something amazing will happen that will make the perfect "come back entry".

On the other hand, sometimes just a good smack from a loyal reader helps too :) (♥)

Despite a small virtual galactic detour, I actually have accomplished things. In fact, today I worked pretty much all day. I actually have two things almost ready for release, all I need to do is make up the vendors for them! And I started work on a few remakes and additions to make up my collection at the Jewelry Expo (it's coming up pretty darn soon), and I have to clean up some textures and jagged edges on some very interesting goblin masks. I think you'll find they're incredibly different from my normal modus operandi, and should be perfect for Halloween.

To apologize for my silence, here's a preview picture of what's coming very soon, hopefully within the next couple of days. 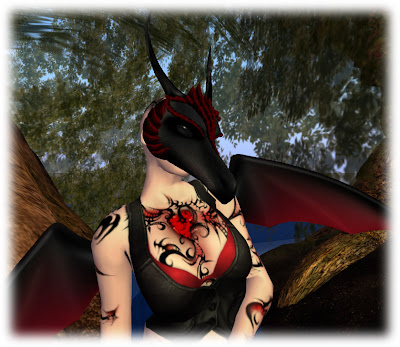