On January 15th, 1797, a man named John Hetherington was arrested and brought before the court in London for disturbing the peace. He had constructed and designed something of devious intention, something that caused women to faint, dogs to yelp and a man to be trampled by an awe-struck mob.


This malevolent creation, which was "calculated to frighten timid people" was actually quite benign. And stylish! 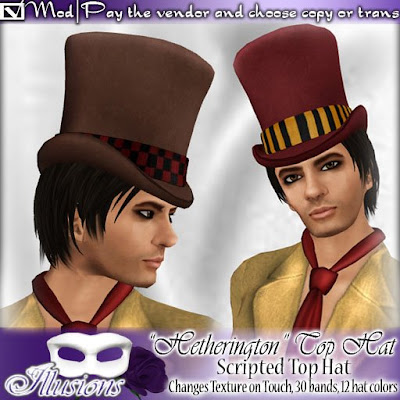 This haberdasher had designed the first top hat. Why it caused such a ruckus? I can't imagine, I just blame the lack of TV and very tight corsetry. But, when he wore it out in public, it got him arrested! I have to wonder what they would think of drag queens. Thankfully we live in more jaded times, where the only crowd you're likely to draw wearing this will be folks wondering where you got it. 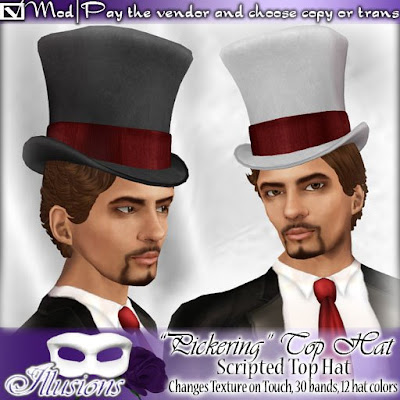 Although the first top hats were silk and lustrous, I have to say I love the warmth and character of a wool felt hat. It has a certain richness and the possibility for many colors, which is what I've happily obliged with. It has the same variety of hat bands and felt colors as the bowler, and flexibility to be quite modern or traditional depending on your outfit needs of the day. 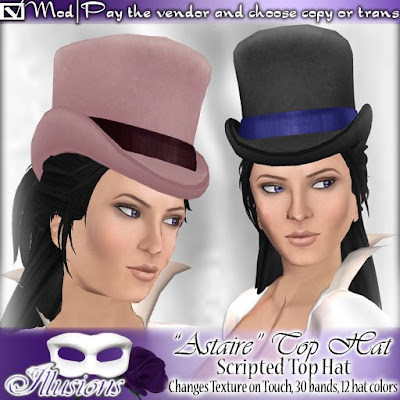 These are all quite simple because I felt I wanted a variety of shapes, and then move on to more complex and creative millinery using these as a base. This one especially I'd love to make into an English riding hat, with a nice scarf or a veil. Speaking of having fun with the designs, I decided to do a really fun, more modern one... 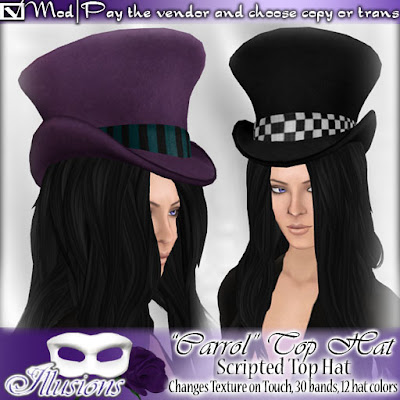 Named after Lewis Carrol, I almost called this the Mad Hatter but I definitely have bigger and wilder plans for that hat. Besides, it wouldn't be for the Mad Hatter if he didn't have his price tag left on :)~

I have grand plans for these hats, now I just hope I get around to manifesting them!

These lovely scripted hats are now available at the store for 150L each!
at 6:50 PM 1 comment:

I recently went back to the mainland and found that it was much warmer in the Snowland region of Sansara. Could it be possible that global warming is effecting the virtual world too? What am I saying, it's probably just spring! My island just thawed and I'm probably just feeling the contrast from the cold winter and all my snow covered pines, and the green sprouts of the spring weather. 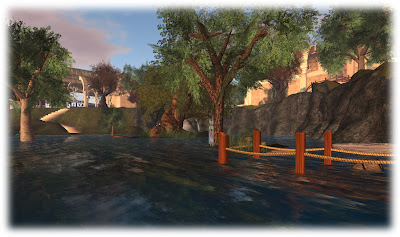 But I do suggest avoiding going down to the garden walk, and wearing your waders if you plan to go fishing... it seems the bottom area has flooded. It's probably just all that melting snow.
at 11:40 PM No comments:

Goodness, what's this, a release?

Haha yes, I can only keep up the work on my sim for so long before my attention needs to wander to other things. The St Patty's Paddy's Day freebie got me majorly going on a bunch of gentleman's hattage, and after I felt so clever with how I made the top hat, I decided to make a hat I've been asked to do for ages. 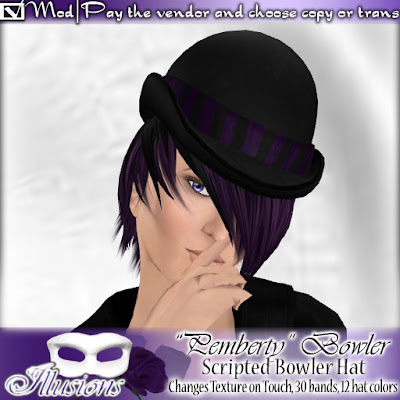 A bowler hat has a lot of flexibility. It can be stiff and stodgy or it can be evocative of gangsters and violin cases. Or it get be quirky and funky or whatever you need it to be. 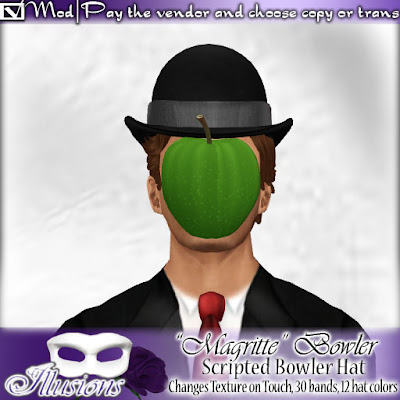 Anyone not familiar with Rene Magritte probably won't get this reference, or the title of this entry. But the whimsy of it all was irresistable to me. This vendor picture is a little homage to one of his most iconic paintings, The Son of Man. In fact, since the apple is merely a retextured version of Qarl's full perm apple, it's included with the bowler :)~

Both of these are scripted to change texture to thirty different hat bands and twelve different felt colors. There are three different band patterns to choose from (solids, checkers and vertical stripes), with nine colors for each of the patterns and twelve colors of solid bands. Hopefully that's enough for all you crazy individualists out there!

Sadly, there's an issue that I'm aware of with the pattern bands. Due to the way the texture has been made, with lots of vertical stripes making up the ribbon, Second Life has some trouble rendering those patterns properly without an option called "Anisotropic Filtering" enabled. I went through quite a few uploads and shaking my fists and ripping my hair out trying to figure out what was going wrong and ways to counter it, and I realized I couldn't fix it for everyone without sacrificing the look and the feel of it. I'm sorry if it turns out your computer can't handle it, but there are still twelve solid bands that look just fine to everyone and are just as snazzy, which is why I forgave myself for letting it go. Anisotropic filtering can be accessed through Preferences->Graphics->Hardware Settings.

I was cleaning out my inventory, like you do, and I was going way deeper than I normally do, into all those dark and scary folders full of stuff I haven't seen in years. My inventory is somewhere around 38k items, so cutting that number down has been a real long-term project (down from my high of 56k sometime last year).

I found this really weird notecard though, hidden in the depths of some of my old projects. It's scribbled in some arcane riddle thing and I can barely understand it. Here, maybe you guys can help me figure out what it says:

The flipsing swish ones fly from below
to rise on the harlequin day
to answer the calls of those who came before
they will have their day in the halls of stone
It seems so strange that I found this, it's almost like a prophecy. I was marked as the notecard's creator yet I don't ever remember writing this. My guess is I was probably sleep deprived and a little drunk whenever I wrote it, and it probably is nothing.

Happy St. Patrick's Day! Or should I say, happy great green booze up day! I hope your neighbors come home quietly tonight, or at least that you're so soused they don't wake you up.

I always give a top hat on St. Patty's day, or at least I have for two years straight and I wanted to keep up the tradition. However, when I looked at what my options were for giving a freebie I realized that I could either do another version of a hat that is now almost two years old (ancient!) or I could make an entirely new top hat with which I can remake my other top hats and maybe even make new designs with (homg, actually making a new design rather than chasing my own tail 'round and 'round remakes? be still my beating heart). So rather than spending the usual hour or so on a freebie, I spent the whole day... 'cause I love you all just that much. Yes, that's the one and only reason. 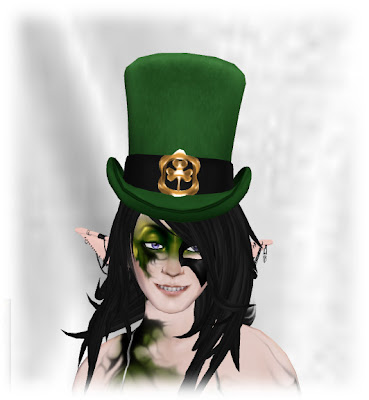 I'm feeling very clever and full of myself, but in this picture I just look a bit drunk. Who am I to argue with a stereotype? But the reason for my feeling clever is that I solved some problems that had been like speed bumps (that were the reasons I had been happy with a normal prim hat selection for so long!) and happily bounced over them and didn't even drop a muffler.

But anyway, please enjoy, and make sure if you're not in Masqueraderie and you'd like a copy, to make sure you nab it out of the notices before the 14 days are up :)
at 3:12 AM 1 comment:

I need to just post despite having no pictures or evidences of my activities. So what if some people on the fashion feed need to scroll down past this! I have people who care about my work to update!


Work on the sim is going slow and steady, I've started working on textures and going into some of the detail work. It's been scaled up too, so that a Tiny avatar can now rampage comfortably. To tell the truth, there hasn't been much else I've been working on aside from decorations and a few side projects. But, anything I make I'm going to save for the sim opening so there will be more silence and more boring and fruitless refreshes upon this humble blog. There might be a release or two but don't get your hopes up.

If you're looking for something to occupy yourself where you would normally be reading something or looking at pretty pictures, check out this short film. If you haven't seen it, it feels eerily like the future of SL.
at 12:19 AM No comments: