Despite my silence on this blog I've been working hard and steadily on a long, involved project.  Here's the unfortunate twist though... it's not for Second Life.

Arenanet, the company behind Guild Wars and Guild Wars 2, made a post a few days after my birthday announcing that they were scouting for character artists.  Creating things for Second Life is not too different from what a character artist does, and it's where I imagine myself moving on to when working on Second Life no longer becomes an option.  I've played Guild Wars for six years now and I've been watching Guild Wars 2's development like a hungry hawk, and over that time I've come to greatly admire Arenanet as a company and community of creative people.  This simply was an opportunity I could not pass up. In fact, I knew I'd never forgive myself if I didn't give it a try.

Rather than requesting a resume and portfolio, they simply issued a challenge.  Create a viable game asset based on a piece of concept art. This sort of open ended offer is perfect for someone like myself who comes from a rather unconventional professional background.  Self taught, self employed, no formal education for 3D modeling , no certificates and no "proper" job experience aside from retail.  That doesn't matter, though, when all you need to do is show what you can do.

Unfortunately, I wasn't 100% sure I could do it, as the criteria listed were just a bit beyond what I'm comfortable with.  I'm used to a luxurious budget of high polygon counts, glorious, rich texture maps full of UV space, and being able to put all of my detail directly into the geometry of an object.  But I wasn't going to let that stop me.  As I made my model I made countless revisions, reiterations, and learned a lot of new things about uv mapping and low poly modeling and spent the past two and a half months straight working on nothing else but the armor design.  As I'd get sick of looking at one thing I was able to pick a dozen other little details that needed doing, and I did each of them about four times over as I found that it had too many faces, or a UV map had to be updated, details that didn't project, a texture bleeding into other islands and on and on. Two and half months of this.

But again, I have a passion Guild Wars, and I love Arenanet, and the very idea of being able to work for them or with them was the only carrot I needed to keep going.  Every day I hadn't finished was another day I was nervous I had missed my chance, and as the days kept going by I decided to set a hard deadline for myself.  No matter what, I'd finish before the GW2 headstart launch.

Guess what?  The headstart launches tonight (13h 32min from now as of the time I'm writing this). 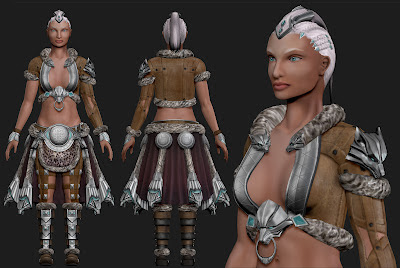 I sent it to them, and now it's out of my hands.  I don't even feel that nervous, because the thing I was most afraid of won't happen now.  I was most afraid that I would miss my chance, that I would pass up this opportunity without even trying.  I have faith that if I'm ready, they'll let me know, and if I'm not I will have many more months of working in Second Life to hone my skills for the next time.
at 1:36 PM 3 comments: