I took a little diversion from working on my current projects to pop out a top hat for St. Patrick's Day! Whether or not you celebrate it, there's no reason to pass up a free hat. Plus, it's good practice for me! 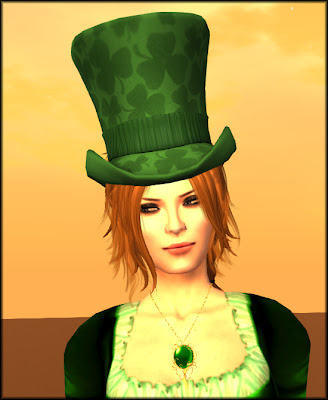 This is a brandy new top hat, not just a re-texture of an old one so it is mesh, and one object. If you haven't upgraded your viewer to be able to see it, why not? Get to it, you fabulous fashion conscious luddite!

You can find this festive verdant chapeau in the notice history of Masqueraderie, from now until the 31st.

If you're celebrating St. Patrick's Day, please do be safe and make the right decisions... or bring people with you who can do it for you ;) Have fun!
at 9:29 PM No comments:

An oldie but a goodie from way back in the ancient days of 2007 is my Mezzaluna mask. Despite being over four years old it still has looks pretty decent, I have to say. It's exotic, beautiful, and well in need of a meshtastic remake. 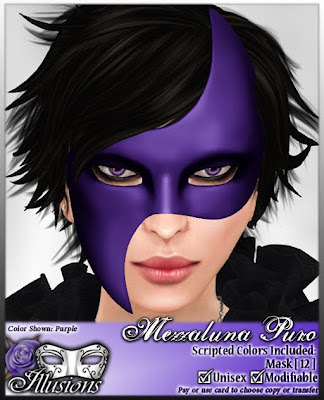 The picture is a little homage to its ancestor. I think you'll notice though, that this one is a bit simpler, without tassels or chains like the first one. That's where it's earned the "Puro" in its name, this one is just the shape for those folks who like to keep things simple.

You now have the twelve color options I offer with all of my masks, instead of just being locked into purple, and this one is properly unisex! I did a special shape just for men with a more prominent brow and nose. 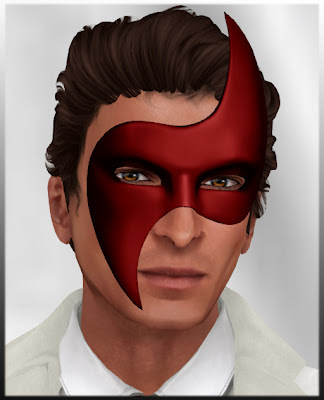 I have plans to make a more ornate version, but just for now I'm going to try and offer as many basic shapes of masks as I can. So the tassels and chains will come later! (wow, that sounds pretty raunchy...)