When Deoridhe Quandry approached me with her commission, it was one that I took a special delight in.  I've been looking forward to doing it since she first suggested it and it was a lot of fun to do.  You see, Deoridhe is a fairy, and she wanted a pair of mesh fairy wings.  My first thought was "really?", but then I realized it made perfect sense.  While flexi wings might have great movement, they don't have the same customization or opportunity for detail.  Mesh wings would actually be really fun to do...

She gave me creative control, and I'm just such a sucker for curlicues and flourishes. 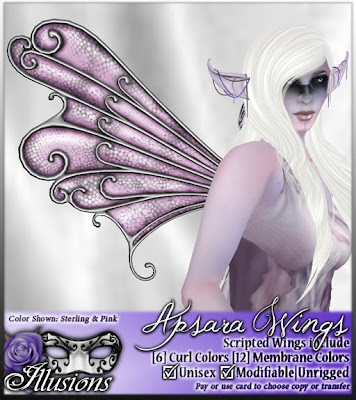 Deoridhe suggested the name "Apsara", inspired by the Hindu divine spirits of air and dance.  The membrane I painted in Zbrush, just putting some light and shadow and a bit of shine on there, and then I overlaid a scaley texture to hopefully evoke that delicate insect feel. I love the living, silky feel it evokes, with just the right amount of shimmer.  I also took care to do a little trick that lets the mesh shrink down to tiny or petite size, so since they're modifiable you can easily fit these to your petite avatar. 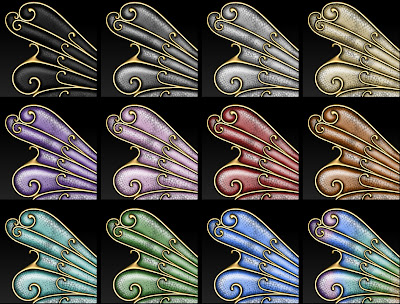 My friends Surreal and Chandra roped me into the Taste the Rainbow Hunt , so I made a special color of the wings with it in mind.  It's a rainbow themed hunt (obviously), so this color of the wings will be out in the hunt gift.  Since it turned out so well, I couldn't resist putting it in the sale version as well. 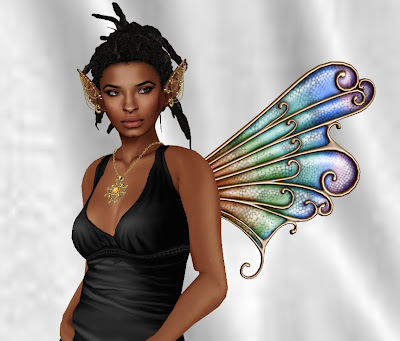 This is, of course, before I saw that Surreal had made rainbow wings her gift as well.  It's funny how sometimes things synchronize like that.  Not sure who came up with the idea first, so I guess you'll just have options!

Out now at the store

On the marketplace: 275L