Things always get a little metaphysical on Carnivale around Halloween. Last year, the veil of life was thin and the dead rose to dance again in the halls. Some of those souls returned to paradise, others to eternal damnation. Well, the ones that returned to damnation apparently spoke of the marvelous time they'd had at the masquerade, and made their captors jealous. Last night I was contacted by an imp, a courier of a demon, who alerted me to the fact that certain creatures of the underworld were going to be inviting themselves to my masquerade this year. Rather than be a poor host, I decided to hold it in their honor. 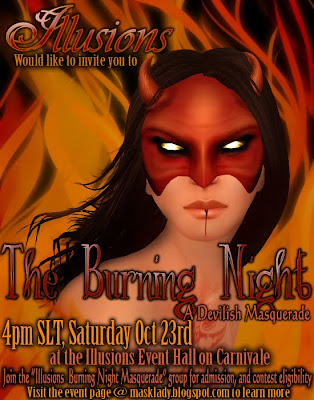 You are invited, if you dare to come, to dance away the night with imps, devils, demons and seductive succubi. I will be host to the hosts of hell, and open my halls to those that you hopefully will never meet elsewhere. Come, all those that are tired of the same old circles and tortures and have some fun.

As usual I have to ask that when planning your costumes, you adhere to the following guidelines. They've been a policy since 2007 and have allowed my masquerades to be relatively lag free and very enjoyable for even those on older systems. If we all pitch in, we can all enjoy the costumes without gray people.


Streamline your AO, or leave it at home
Nobody likes looking like a noob while being a wallflower. However, if you don't plan to dance, fill a veritably lag free, low prim ZHAOII with your two or three favorite stands. Otherwise, just go without.


No particles, and no listening scripts
Turn that bling off, and make sure you don't have any items on you that respond to chat commands. Make copies of items that have resize scripts in them and use the remove feature that many have included.

As usual, there will be a costume contest, determined by vote, to vie for the titles of the Burning King and Queen. Two previously unreleased, themed masks will be awarded as the prizes, along with an Angel Card good for 1500L worth of Illusions goodies.

If you are planning on coming, please be sure to join the "Illusions Burning Night Masquerade" group. There is a small fee of 150L as a token of commitment, to make sure that the people who are members seriously intend on coming. Make sure you join the group early, do not put it off because you don't have a group slot. Spots will go surprisingly fast, and I will refuse to add a single soul more than 50. I will, however, have a waiting list just in case anyone leaves the group, which has happened before. There will still be hope to get in even if you hear about it too late.

Masks are required, but a complimentary mask will be offered at the hall, which is the mask shown in the invite. I know the costume rules are tough to follow, especially when it's so tempting to go for excess, but I have the utmost faith in your creativity to be able to work around the limitations, and flourish. I can't wait to see you there.

Linden Lab is migrating the web-based SL commerce over to a new site, and I have to say it's a relief and a pleasure to see it. For years the majority of users who wanted to shop without going in-world used Second Life Exchange, then XstreetSL, which was eventually bought out by Linden. They also bought out the smaller, yet substantially more pleasant to use Onrez (formerly SLBoutique) and since Xstreet was more popular they kept that one active, and us merchants lost the online service we preferred to use. For a year and a half we've had to live with the ugly, inconvenient to use, cluttered but very popular Xstreet, but now that's finally changing.

LL is finally unveiling their new cohesive marketplace which is a beautiful merging of the two sites. The technology Onrez used to make it more pleasant to merchants and the incredible volume of products and vendors of Xstreet are being merged after all this time to create the new SL Marketplace. It's not perfect, and it's still in beta, but considering Xstreet is closing October 19th if you don't like it, you don't have much of a choice (except maybe go to Apez...?)

I for one welcome our new online commerce overlords. I'm actually really excited about this change and for once I didn't mind going through my listings and making changes using such handy tools as bulk edit and quick fill. The new marketplace has advanced technology like... listing keywords, and choosing related items. Can you believe Xstreet didn't have that? And there are a lot more advances and features on the way.

I've set up my storefront, and I'm actually looking forward to putting more of my store online than has been before. I've had a tendency to get impatient in the past and only put my biggest sellers or whatever I get around to. But they've made it so quick and easy I don't really have an excuse not to.

Quick tip for my fellow merchants, if your Magic Boxes end up getting full and hard to keep track of, rez another! Sort your products and put each group into a different box. And for people with multiple colors, keep in mind that soon colors will be able to be grouped under a single listing for an item, and really focus on updating and polishing up one copy of each item. The other colors can come later.

Hope you're as excited as I am, I have to say this is one of the nicest developments for content creators LL has unveiled since sculpts.
at 10:01 PM 1 comment: 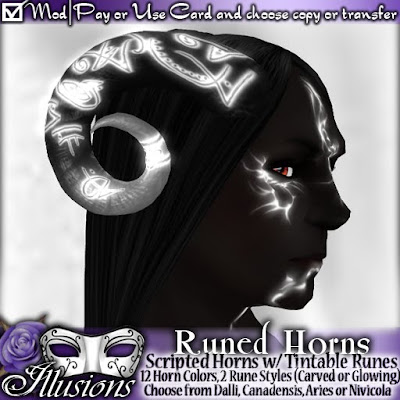 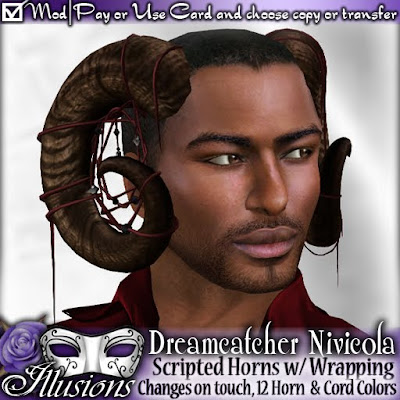 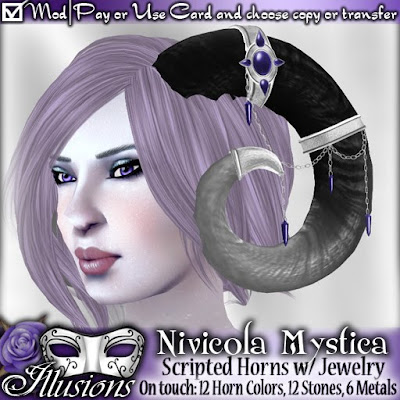 Seeing the final results, I have to thank him. There was a lot of frustration, long and arduous work and far too many times I just was simply not in the mood to work on these... Things just dragged on and took so much longer than usual. I had a lack of inspiration, a blocked muse, and the fount of my creativity was plugged. However, with the help of him, friends, and even my mother offering me suggestions, concepts, and encouragement I worked through the spoiled brat that is my self discipline to finish these. Hopefully he'll be right in the end that you guys will love them... but I'm not going to let him do it again! I like my creative suffering to be my own damn fault XD
at 1:33 AM No comments: