And finally, the last piece of my trio, Horus:

I'm proud to finally present the sun god who watches over us all, Horus. He is the last in my series of Egyptian gods, and is a special edition as well (though not limited).

Horus is also commonly known as Ra. The two gods were merged in the later dynasties when the upper and lower kingdoms were united. He was a god of the sky, a soaring falcon whose eyes were the sun and the moon. He was a symbol of protection and royal power. He wears a Pschent, the double crown of Egypt worn only by the pharaohs. It was a combination of the crowns of lower and upper Egypt and was a sign of unification.

• His symbol, the "eye of ra", (also called the wedjat), was inspired by the markings on the cheek of a falcon.
• He wears a Wadjet serpent on his crown to symbolize the lower kingdom, of which Horus was a patron god.
• The hieroglyphs around his medallion read: Horus, He Who Watches Over Us All.
• The headdress is angled to mimic the markings of a falcon. In illustrations, Ra's pale cheeks are in contrast to a dark headdress or wig which represents the darker feathers around the bird's head

He is scripted to change texture, so that his headdress, the metal trim, and the gem all change. The Pschent is a separate attachment so if you don't feel like ruling Egypt 24/7, you can lay down the heavy crown. 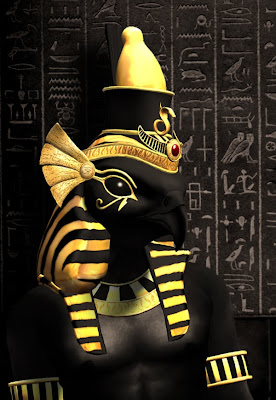