In 2007 I created my first limited edition mask. It was my pride and joy, my best creation. Only ten were sold, leaving many people IM'ing me for as much as a year after hoping to get just one more.

That mask was Anubis:

The god of the dead has returned. And this time, he's mad not limited edition. All of these Egyptian creations have been building up to this: the return of the gods.

It is, however, a special edition. There is a month's worth of work in this mask alone, and that time usually goes into multiple projects or things with many different pieces. It won't be going anywhere, but it has been priced at a more premium rate.

The jackal was a destructive scavenger of the dead, but through Anubis the Egyptians turned him into a more protective force. He would prepare the dead for their journey to the underworld to be judged by Osiris, and is often pictured either embalming or in the hall of judgement.

Some fun details I'd like to point out, since I put them in there:

• The medallion on the side of the head and under the gem reads "Anubis: He who is upon his mountain". This was one of his titles regarding his role as the caretaker of the dead, and his position protecting the tombs.
• The flares on the side of his mask contain excerpts from the Egyptian book of the dead, in which he's often shown in illustrations.
• The scarab wasn't just put in there because it's Egyptian-y, it was a symbol of rebirth and transformation and was often included in tombs as a grave gift.


The mask is scripted of course, and the all of the metal accents change, along with the gem. The headdress corresponds to the six metal colors included, with black or white stripes. The cloth hanging down does not change, as it matches the textures of the Semer and Semeret sets but of course since it's mod, that's easily tinted if you want.


I'm so very proud to finally be able to bring this back. Four years ago, I felt it was my best work, and now I'm upholding its tradition. 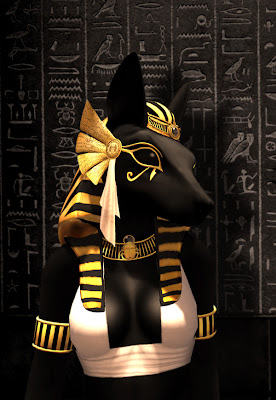 As with the first series, there were three. Coming soon, you can expect to see Bast, followed by Horus.

I'm a bit late, but that's what I get for wanting to do things right rather than quickly. Firstly, Accessory Fair is benefiting The American Cancer Society, and so here is my item devoting its profit to RFL 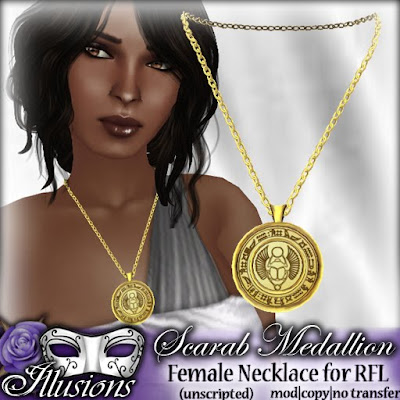 This beautiful Scarab medallion is a way to take a piece of Egypt with you. With detailed hieroglyphs and a beautifully rendered scarab in the center. That was certainly "fun" putting my new tablet to the test! I admit I cheated though, tracing a traditional scarab cabuchon with my own design. There's a male version as well for the gentlemen who are jealous.

The hieroglyphs around it are a font I found (Meroitic - Hieroglyphs) and they actually contain a little clue for something special I'm still working on.

Really what's been hanging me up so much though is finally giving the men a fair share of my attention. With Semeret and Khepra, they must have been feeling left out. So, sorry gentlemen, please consider this my making it up to you! 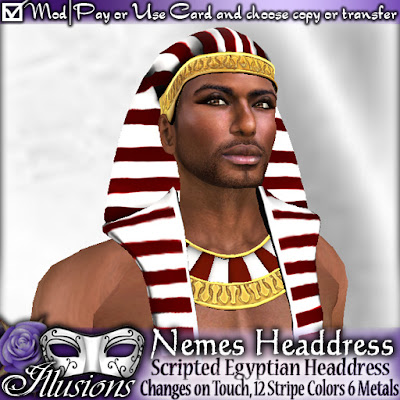 The Nemes Headdress was the headgear of the noblemen of Egypt. You can wear it without the shoulders for the look of the Khat headdress, a simpler version which was worn more commonly among the upper class. If you're wondering where the snake on the forehead you're so familiar with is, I'm sorry but you're being presumptuous! The Uraeus was the symbol of Wadjet, the patron goddess of Egypt, and if you weren't royalty you didn't have any business wearing it. My aim it not to make everyone a pharoah! Women aren't missing out on this one either, I made sure to include a female version with a special fit for the shoulders.

What's that peeking out beneath the nemes though? 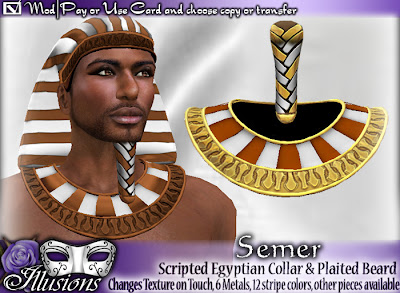 A version for men! If you gentlemen tried to get the Semeret collar working for you, please let me know and I will send you a copy of this one as an upgrade. It's especially made for that quirky male mesh and should fit on your masculine shoulders like a dream. For your noble chin, a plaited beard like those that can be found on so many sarcophagi.

What are you going to wear with all of these manly authentic accessories?

Almost nothing of course! Just kidding... sort of. The Scots weren't the only ones who enjoyed a nice cool breeze up the leg. The Semer loin cloth is an excellent companion to the Semeret silks, featuring the same gathered cloth around the hips with a loose tie in the front. The belt is scripted to offer you those same fun options of changing metals, gems, and stripe colors and also comes with a separate option if you want to wear it with a more ordinary outfit. But why would you?


These amazing items can be found at my booth at the Accessory Fair until June 26th, where they will be moved to the main store. The Scarab Medallion in it's current incarnation is only available until then.
at 7:53 PM 2 comments:

It's my birthday this weekend! 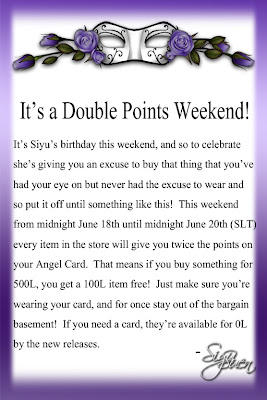 To celebrate, I'm going to be making all of my vendors give back twenty percent of your purchase in points, so the more you buy the more free stuff you'll get! And of course you don't need to limit yourself, you can redeem the points you earn at any time, top them off with a points pack, or give them away as a gift card to a friend. It starts at midnight, SLT on June 18th and goes until the end of the weekend, midnight on June 20th (early Monday morning).

If you don't have an Angel Card and you feel like this doesn't apply to you, you're being a silly billy. They're free and all you have to do is wear it and then buy stuff in order to get points. Then, once they add up pay using your points instead of Lindens. Yeah, it's that easy, don't you feel foolish for not having gotten one earlier?

Oh, one more note, the items in the basement aren't compatible with the cards due to their not being worth the effort to sneeze at them and I'm only permitting you to gaze upon them and god forbid purchase them due to the beggings and pleadings of kind and merciful people who did not want me to dispose of the primordial slime that my older creations represent. MISPLACED MERCY I SAY.
at 2:52 AM No comments: