Dawn breaks and the fairies return to their realm, and I'm left to sweep up the fairy dust and clean up the spiders the drow always seem to leave behind. Another enchanting night, full of revelers and as always, amazing costumes!

I know what you're wondering though.  You're thinking to yourself "But Siyu, if everyone was so fabulously dressed, who could have possibly be voted to have the best costume in such a crowd?".  Well, as always it was a tough decision but the noble host of the court crowned their Lord and Lady of the Unseelie.  A consistent favorite, Aceius Hax, and the wickedly toothsome Yukio Ida were lucky enough to take home both the title, and their prizes.  The new Unseelie masks made especially for the event.
The masks are as of now not complete, but I'm working on finishing the male mask and adding colors for the female one. However, they still made suitable crowns for the new Lord and Lady of the Unseelie. As always, I was dragged from my hole appreciate an excuse to socialize and spend time doing something other than work for a change. I love sharing my music with you, catching up on news and dancing the night away. I want to thank all who attended for brightening my night and making the party what it was: a success, but most of all a fun gathering of friends. 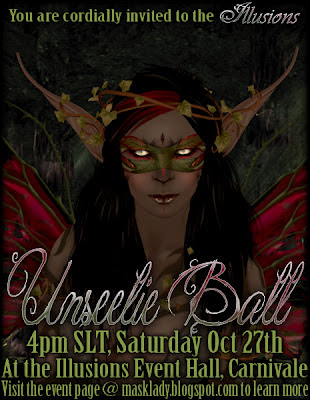