Rising From the Ashes

So far one everyone's favorite angel wings are the black, the white, and the phoenix. Candy hasn't been able to change out of them (she has an amazing outfit to match), Selos has changed her color scheme around them, and even I, who normally shy away from warm colors and hues just had to wear them around in this weather to give me that extra feeling of body heat. So hell, if I'm going to be wearing these wings, and I have nothing to math, let's make something to match 'em.


A long long time ago, in a galaxy far away, little beginner mask maker Siyu made a phoenix mask. This was almost exactly a year ago, and since then people have admired and loved it, even though it was a relic from an early era of a lack of knowledge about root prims or symmetry. It was even blogged by the infamous Swirly Cyclone. It now rests in peace in the retired design freebie box.

But like all phoenixes, it ended up rising from the ashes: 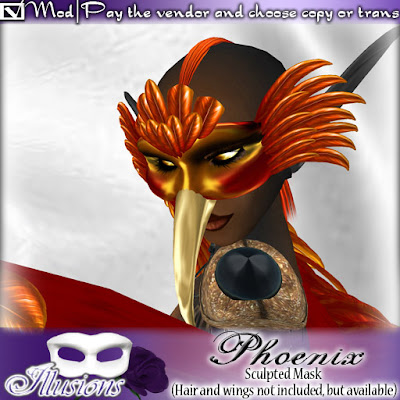 After I did the pictures for this, I wandered around all day in this outfit. I felt stunning, and apparently I was, because I got some very flattering compliments. There's a demo available for this mask, because I've just decided to keep doing them for each new mask I put out. Hopefully it will make people feel safer about making a decision for their costumes.

I've decided now, after lots of questions about where I get the outfits modeled, to start doing a "Recreating the Look" for my vendor shots. I haven't done it before because it takes time, and frankly, folks just didn't ask so I didn't think they cared. But more folks have been asking so I guess you do care :)

Looks great as always, Siyu... and yeah, nothing beats having a demo to play with! I guarantee that's been a huge help for my sales.