The UMB Hat and Flutteries

Aaand I'm back :) I've been back more and more but I believe I can say it officially now, the jonesing for Oblivion has ebbed and I can back to my normal (second) life now.

Yesterday I released a hat that caused a sensation amongst the ladies in Fashion Consolidated, a hat I named after the "unsinkable" Molly Brown. 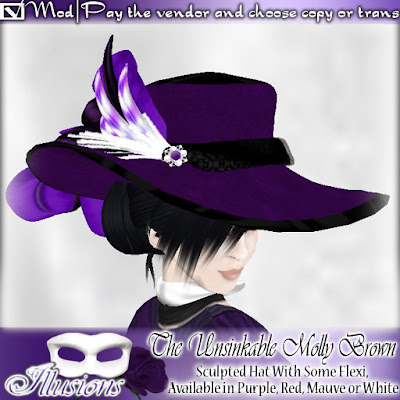 Molly Brown (or Margaret Tobin) is perhaps one of the most well known survivors of the infamous Titanic. Her story was incredibly inspirational for women at the turn of the 20th century, as she kept a cool head in the disaster, calmed her fellow passengers, and even demanded that the women aboard her lifeboat were allowed to row as well as the men. She was a suffragette, an activist, and a philanthropist, and she used her fame from her survival to make great strides toward women's rights and raising money for the families of those who didn't make it.

When I first made this hat, I was going to call it a Mae West hat, because it was sassy and bold... yet it was much more classic Edwardian than 1920's saloon. So I asked Miriel for help naming it, and she gave me gold: Molly Brown!! It's the perfect name... a traditional Edwardian hat with boldness, flare and personality, for a lady who had the same. The hat's available in rich purple, bold red, pure white or soft mauve, and seems to go with pretty much anything you care to wear. Some of my friends who ended up with it were saying that it was Harajuku, gothic, French modern or what have you!

There is actually a demo available for this hat, which is something I'm going to start implementing for my more three-dimensional pieces. So there is now a demo for Gracile, and there will be a demo soon for Eliza's. All of these are pieces that really need to be seen "in the round", and pictures can only capture one or two sides.


Speaking of things that look best from all angles... I've been working on a secret project recently, something I've kept on the low down until my friend Iris got inspired and had to shoot a "teasers".... and then of course her pictures are just too gorgeous to NOT share with the entire world. 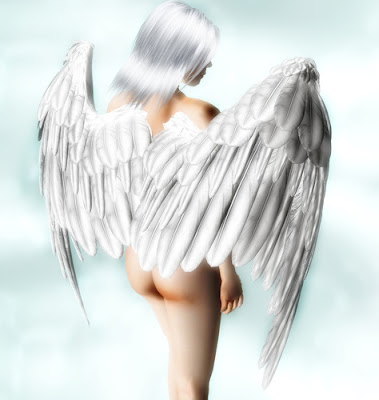 Your work always floors me and leaves me speechless Siyu. I can't imagine how you do what you do, it seems like magic. Beautiful hat, beautiful wings. Wow!