The new issue of Second Style came out today, and that reminded me that I've been putting off creating an ad to run in it for ages. Second Style demands an extremely high resolution, so that all of my other promos were actually not eligible for the magazine! So to make an ad, I had to do a high resolution photo shoot especially for it, wearing items that I created. Which items, what pose, where etc all ended up in a convenient recipe for putting the darn thing off, despite the fact that I'm friends with both Celebrity and Iris who run the lovely thing.

So tonight I finally flashed on what the perfect picture would be, and with some struggling in qavimator to make my own pose, and about two hours in photoshop, I've come up with my ad that I'm thinking of running in the next issue: 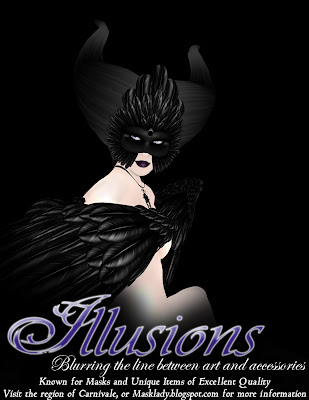 Yes my avatar is... erm... nude. Although well hidden by strategic placement of various elements, when thinking up the picture I decided that I wanted absolutely no distractions from my items. I wanted the focus to be entirely on my avatar's eyes through the mask, and the softness of the wings, and the line from the shoulder blade up the neck. Although the mere fact that there are "no distractions" might be a distraction, I still feel like I've made it artful enough to get away from the "sex sells" approach to advertising. I could also be kidding myself. I'm still on the fence about it, honestly.

I definitely like the wings, and the Seraphim just goes along so well with them, I love everything except just the fact that Siyu's nude and it's going to be unavoidable that people look at that like "whoa, she's nude". I doubt it would have anywhere near the same effect if I wasn't trying to hide it so damn much. There are so many skin ads in Second Style that couldn't care less (boobies!), that I might be rather conspicuous in my modesty. Conspicuous in advertising can't be a bad thing though..... >.>

Thoughts? Feelings? I need some opinions on this. I've always toted my business as being utterly and blissfully PG rated with no sexual nuance in the slightest, so as modest as this is it's very racy for me. Some female comments would be preferred, because let's face it, men will never argue against attractive female nudity...

I might just scrap it as an advertisement and just call it art.
at 4:37 AM

Nuu, you must use it!

It may be nude but it's very tasteful and purdy!

OMG. That looks stunning! You did a great job with it. When I look at it, my eyes focus on the feathers and mask. You hid your nudity well :P

But seriously, that is a work of art. I think it would be very sad if it didn't get to be seen in Second Style. So pretty~

It doesn't strike me as racy -- though my default view of nudity is nonsexual, so that colors my response. I'll also note that Tete a Pied had (at least for a while) a nude ad up in their store. And yeah, they sell skins, but still. TaP's nothing if not classy; if they can do it, you can.

It's a beautiful, striking ad. There are a couple things I'd change if it were mine, but the nudity isn't one of them. :)

The picture looks great! Very exotic and vaguely sinister. Makes me think of an evil genius doing burlesque. You really make the wicked hairstyle work for you!

Yes, by American standards, the crazy women that tried to ban metal music and blame television for all the problems with culture today would say that this image is completely unacceptable.

That being said, from my own artistic point of with with it's amateur knowledge of modeling in the real world, this is very elegant and definitely not 'racy'. It really only features the upper body, and the "naughty" area is covered very well. You are not in a laid-out/stretched position, which also lends to this not being sexual. If you are still worried, I guess you could look into a latex skin or some sort of animal prints so you are not so 'naked', but that may cause too much distraction from the items.

It also seems too dark. I can see where it looks nice with the blending into the background, but it makes the light skin tone stand out a bit too much. I'm not sure if flipping the color scheme would be effective, as while something bright on a soft- or dark-tan skin would look equally beautiful, it might not have that same daring-mysterious feel I find here.

Eeeee thanks guys ♥ You've helped make up my mind to definitely use it!!

Miriel, I think I'll IM you to ask about what you'd change since I simply love your taste

Pandora, you made me laugh out loud and imagine Magneto in a corset a la Frankenfurter! Exotic and vaguely sinister was exactly what I was going for (with a dash of creature-like/feral), so yaaaaay!

Thanks Terry :) Your comment about the pose is very reassuring, and yes I was trying to go for a less "inviting" look with the pose... I'm very glad I succeeded! ^.^

I can see definitely where it can seem too dark, too much like a black hole on the page, but I was actually hoping that would help make it stand out that much more on a magazine page. I was thinking the darkness would just suck you in and lead you right to her face, then of course the "Illusions" tag. I also realize my monitor might be brighter than others... Hmm, maybe I can turn up some contrast on the wings to make them brighter

Np problem, Siyu, While reflecting upon this, I contrasted it to one of the very early tasks in what I think was the first American's Next Top Model season, where the girls had to model naked with jewelry. Granted, that one intended to be a nice European balance of sexuality and art rather than modesty, yours really does not fall along that imagery.

I also may have turned down my monitor too low, so I could just be a dork.

Siyu Suen
Blurring the line between art and advertising