The other day I was finally able to celebrate Thanksgiving with my family, and so I've decked the Carnivale halls with snow and a Christmas tree and I feel I can finally release some holiday items!

Munchflower (of Nomine) is now making it a routine to IM me after she's completed some skins and say "want to make a matching hat?" which spurs me to make a whole darn set of items. (*coughharlequincough*). Her new skins, titled "Merry Jingly" are all holiday themed, and I picked my two favorites, "Candy Jane" and "Snowflake" to make matching hats and furry coats to. First came the hat: 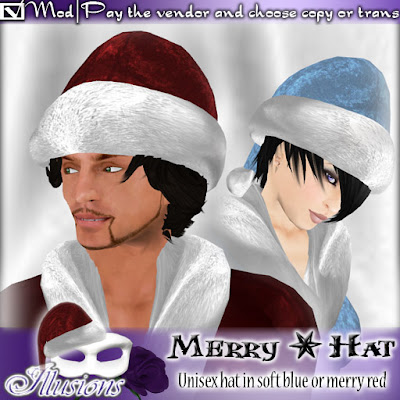 It's non-flexi, but it is soft, and velvety, and sculpted. I tried to give it some real fullness but also make it look floppy, and I think I've succeeded quite well! I've passed this hat around to some friends, and they've all found ways to integrate it into their outfits. Also, even though I'm not Jewish I've always tried to be politically correct and not pretend they don't exist, so that's why the hat is also available in a soft blue. Plus it matched the coat. 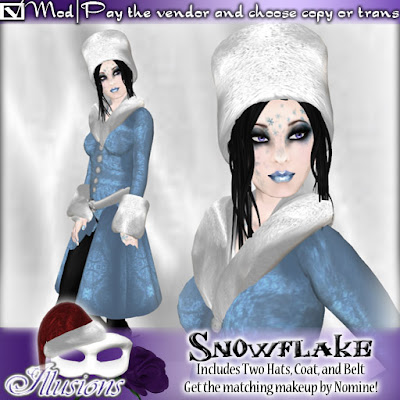 It might be a little obvious that it's somewhat similar to my mid-length Coque Feather Coat, just with fur and no feathers. Well I'm taking baby steps as far as clothing design goes. I had all of the shading and work done for a coat, I just made it velvety and furry! It's fitted for a woman, but I avoided breast shading so that men can wear it as well if they fit the pieces to them. Originally this was only going to have the "Russian/20's diva fur hat", but I decided to include both the fur hat and the merry hat in both of the hat and coat sets. 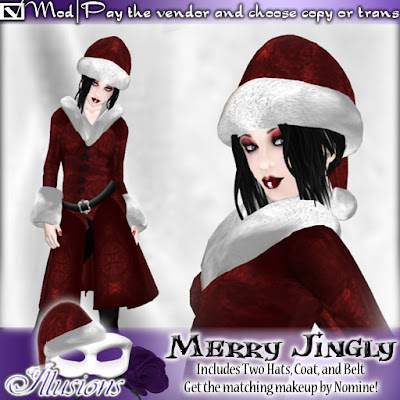 I feel very much like a sexy Santa when I wear the "Candy Jane" makeup (shown) with this outfit, plus some high sleek black boots. You don't need to necessarily bare all in order to have some holiday allure!

Finally, wearing that outfit, I realized I was missing something. Some holiday jewelry I could wear under that sumptuous and fluffy fur collar: 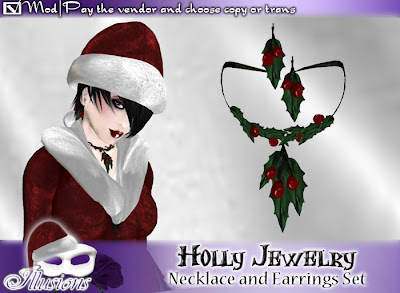 Holly is a rare berry in that it starts to bear fruit in late November, and normally all through even January. It gives a rare chance for wild animals and birds to have berries after other plants have long dropped theirs. Holly is actually the whole reason the traditional colors of Christmas are red and green, and its vivid rich contrast of colors make it a great decoration in your house or on your avatar. The leaves are rather prickly in real life, so I don't suggest you matching your digital self on that one.

I also feel like mentioning that Christmas was banned where I live from 1659 to 1681, just as a fun piece of trivia :D I'm glad that law didn't stick around!
at 4:16 PM

You can check my blog for details if you like. :-)

And ack, I'm flattered but I really try to keep this blog to just SL and all professional officious matters and stoof. It was reeeeeeally tempting though, 'cause I was like "ZOMG she wants to know about MEH!" but then my brain was like "nooo bad idea, give 'em releases instead", and my survey brain was like "awww doh".

I completely understand wanting to keep RL stuff off of here. :-)