Alright! The Venetian Carnival Ball is over, and so I can now reveal the sweet, secret mask I wore to the world. 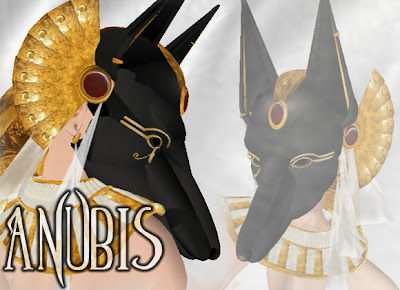 and I am completely honest when I say it is truly the best mask I have made yet. It is also my first Limited Edition mask. I did a quick survey amongst the Masqueraderie folk, and quite a majority said that it was worth a few extra Lindens to have people covet, but be unable to buy... This regal, magnificent God can be yours for 5000L, and will only be sold to TEN people. Only 9 other folk amongst 300,000 regular users on Second Life will be able to say that they are the Egyptian God of the dead. Or, be able to say it with conviction and something to back it up.

Within 30 seconds of my posting this mask in the Masqueraderie group notices, the first one was sold, and within 4 minutes the second one was gone. So that means that there are only eight left, and chances are they won't last. The mask is only available through IM to me personally, and if multiple people IM it will be judged by time stamp. First come first serve!

Edit: They're all sold out! Thank you and heavens bless the ten of you who are now the Gods of the Dead, and worry not those that aren't. I'm not done making awesomeness!

For other folk who are saddened by the high price tag, I'll just let you know that there is an absolutely enormous release coming soon (probably as many as seven or eight different masks). I'm cleaning inventory of a bunch of designs that have been put off ^.^
at 6:37 PM