It's that time again, when my critical eye turns upon the walls of my store and I begin to feel the urge to cull things from the herd. I feel the need to dispose of things that I was never that proud of in the first place, things that don't sell well, or things that are just plain old. 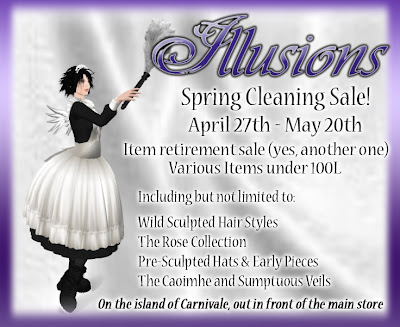 The rose collection was one of the very first things I made with sculpts, and for two years they were a joy to me. But now I want to move on, I'm going back and scripting older items like my necklaces and I realized... I don't think these are worth scripting. I'd rather have new items to play with! Same for some of my early hats, like the Sabrina and Harajuku top hats. Oddly, even despite my new top hats the Victorian still sells well, and I think I can live with it sticking around, but the other two? No. I will, however, reduce the price on the Victorian to reflect its age and venerable standing.

The sculpted hair styles... well... they were a whim. The mustaches are still too much fun to get rid of and so they're sticking around, but styles like the Sweep and the Bowl are just plain not well made, and I can say that because I made them. They're probably the shoddiest, half-assed stuff I have in my store, made as a joke, and although the joke was funny, the joke is now old. I'd rather clear them out so that any future, serious attempt at hair that I make won't be tainted by those things. They have their place with costumes and they're certainly unique, but hopefully any other hair I make will be unique too.

Anyway, go check them out :) They'll be around until May 20th, at that time they'll be locked up in my inventory forever. Everything is laid out in front of the store, out on the lawn for the pickin's.
at 3:12 PM