I went through my store today and did a bit of redecorating! The furniture that was out had to be from two years ago, and I had been playing with my own Rococo inspired furniture for my sim build. For the past few months it's just been sitting in my hobbit house, so I figured what the hell, might as well put it out in the store.

I haven't even touched my sim model in four months or more, I haven't felt that I could devote the time. As a result, it's very likely that the Mardi Gras masque will not have been the last party to be thrown in the current hall, but no promises. I might just tear it down anyway, build the full scale version of the model's event hall and just let it be a stand alone piece for now.

I've added a little bargain wall that has items priced at 50L or lower. I've lowered the price of my Sweetheart Cloche to 50L, and put a few items that have been floating around wherever I could stick them over there. I also pulled out a very old piece from my inventory that I never really formally set out: the Smokey veil.

Actually, I can't remember, did I ever put this out? No idea... but anyway, it's languishing, and its original form in normal prims was incredibly popular. The reason it's been sitting for so long is that there are some minor texture problems that were driving me batty, and what are the chances of no alpha conflict with bangs? 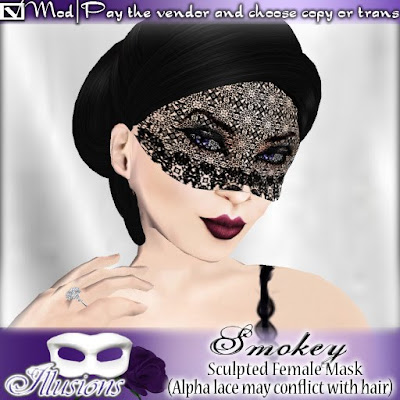 But you know, it's darn pretty, and that's what a bargain wall is for. It might give me a chance to release a few other things that have little bothers like this one. It's 50L tucked around the corner where the moustaches are.

I took down the old pirate head sign, it was cheeky but it didn't say what I wanted to say. I know that the unscrupulous sorts who would steal are going to find a way to anyway... but it's the people who can be led to believe it's alright that worry me. It's a slippery slope and I want to remind folks who've been tempted that the items you clearly love enough to purchase are worth purchasing again. Circumventing permissions in any way is a slap in the face to the original artist. Content creators like myself honestly need every cent. None of us are Anshe Chung, and even the people who are part of the big fashion houses have bills to pay.

As my new sign says, ripping content in SL is like stealing a kid's macaroni picture. It may have no real value to you, and it may be easy for you, but it can break a person's heart. The time and effort and creativity that goes into something we put out for a pittance is all born out of love for what we're doing. And I know that I for one thank the powers that be every day that I can do this for a job, but I wouldn't be able to do it without every person who trades me a few lindens for a piece of my soul. I'd hope that that's a bargain. I'm also quite happy that my soul seems to be big enough to go around :)
at 3:28 AM