I've been working on a slightly seekrit project, and then realized that what I was making has to be released on it's own, it's too awesome to be limited.

What the hell would these be known as? 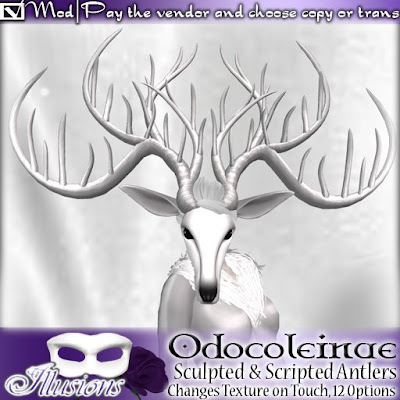 Odocoleinae is the genus known as the "new world deer". They're the moose, the white tailed deer, and the largest breeds that have the most marvelous and sought after antlers. Obviously there is no deer-ish name for just "epic awesome". I wasn't even sure if I was going to sell these. I realized when I first put them on that the people able to wear these are few and far between. Me, Selos, and of course the incomparable Swirly Cyclone can all pull these off but... who else on the grid could be fabulous enough to wear these?

It was Swirly who convinced me to just put them out. After all, how will my answer ever come unless I can see them out in the world being loved. 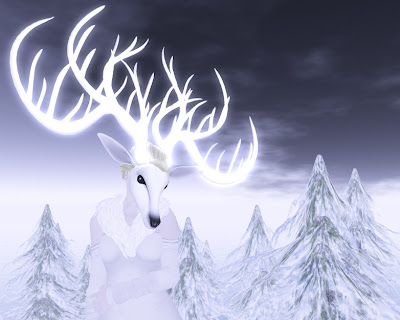 I'm planning a limited edition version of these, only available for a week or so. So if you're on a tight budget, save your pennies :)
at 12:04 AM

OMG, yes, you must be special to wear them. They fall into the same general category of black swan hats in real life. However, I am willing to bet there are more folks brave enough to wear these antlers in SL than you think. They are just SOOOOOO fabulous, how can they be resisted?

*Throws down a glove (gently)!*

I accept your challenge (for my partner)!

The lovely Green Dream sent me a covert Flickr message, urging me to check your site, Siyu. I already have your Siku and Herne... but I now also must own these uberantlers.

I don't think I fall into the category of fabulous, but I'm going to rock these or die trying. Bring it on!

I followed the link you left on Winter Jefferson's blog. I love your story and the photos. I'm glad you didn't succeed in resisting. Absolutely FABULOUS! Such eye candy! And the supporting tale (tail?) just adds to the richness of the shots. Thanks for sharing.

Aww, thank you, WM. Of course, many thanks to Siyu who made this all possible! :D

the limited edition of these antlers are stunning.. so very very tempting...