I haven't been really that Christmassy lately, even in my first life I only just put up my tree when it was ten days to go! People are sending out red and white things like mad, Santa is everywhere, all the TV shows are on their Christmas breaks and I'm... well... hmm.

I'm not Jewish, nor am I pagan, yet I'm very appreciative of the darkness of the winter solstice. On the solstice of course is the shortest day of the year, only a few hours of daylight before the longest night of the year. Many cultures have traditions revolving around keeping light through the long night. So being in the mood that I am to make antlers, I decided to make a way to keep a light with you while the night is at its longest. 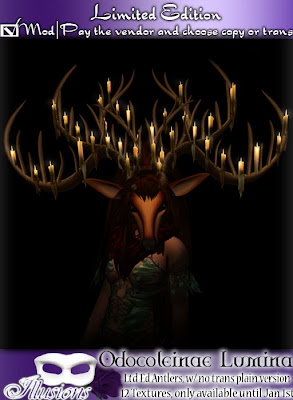 On your head, of course. Beautiful drippy wax to fall into your hair, and bright dancing fire to catch your holiday decor aflame with. But seriously, I've been wanting to (and Selos has been nagging me to) make these ever since I first started working on antlers. They are also my first limited run item evar, since I felt they were a little too special and unique to be a normal release. I wasn't sure if I was even going to release the plain Odocoleinae so you can imagine how I feel about these.

After running into trouble with a lot of people being unhappy and upset at my limited number editions (the Gods of Illusions masks), I decided to never again do a limited number release. Too many people IM to ask and beg and then turn away sad and defeated that the mask they covet they can't have. So this is my first try at a limited run piece, and depending on how this goes there might be more unique things on the horizon.

I've included a copy of no transfer plain antlers with them, which is one of the reasons I told the folks who love them to hold off a bit if you were interested in the limited ones :) I've priced them at 1750L, and they'll be on sale until midnight SLT on January 1st. They still have the copy or transfer option, which is something I played with changing. I kind of like the idea of only the people who were there being able to have a pair, yet I realized people will want to give them as gifts or even hoard multiple copies and resell them much later. In that way, they might be a little less exclusive, but I hope everyone will be happy.

Oh, there's a built in light in order to get the proper candlelit glow; that picture was taken at the midnight setting with no other lights. Because of this, to get the best look I definitely suggest you don't wear a face light with them, or check and make sure your hair doesn't have any included lights in it either. They also look best with glow, as the candle flames are stationary prims and the glow gives it all of their flicker. But of course you can just try a demo and see how you feel about them, you don't have to take it from me ;)
at 6:33 PM

very nice job. should try to come up with an avie for this

*Drools* Those are gorgeous! I adore antlers. I seriously doubt I'll come up with the cash in time, though. *sigh*

Well, now I have an excuse to get my own set. XD

Of course, it's going to be hard to wait, what with this and the Winter Magic at the Black Swan. o_o;