It seems some protesters have shown up on Carnivale, possibly in response to my blog entry. But it seems that they support my decision to stop making masks, just not the direction I intended to go after. They've been picketing my store since a little after midnight (around when I first posted), and they've remained calm and non-violent. I'm not sure quite what they're demanding, as they seem unintelligible and possibly foreign.


One thing can be said for certain...

They seem to be demanding fish. 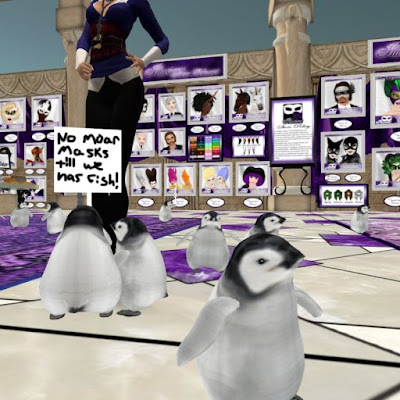 As soon as I sent the notice to my update group alerting them to the boycott, their support and the sudden swarm of teleports was much appreciated, although there was a certain amount of dubiousness given the date. Although they found my words to be true, there are protesters on Carnivale, it was just the nature of them that had been omitted.

As Strength Carver said, there are "picketing penguins pestering piqued proprietors for pilfered pilchard". There were many giggles had by all upon teleporting and seeing the petite picketers, as well as profferings of poissons d'avril (fish of April, it's a french thing) were made to appease them. Yet they are stalwart and nonresponsive.

hey, why aren't they flying? according to the BBC, they do...

Or should I say they wing that one?

That was absolutely brilliant

Where the heck can I pick up my own little tuxed protester? ;)