It's an "omg" sort of day isn't it? Someone obviously was wishing for something today, and who am I to argue with a fairy godmother/the universe/a genie/fate? The long awaited ears have finally got all of their scripts, all of their skin tones, and are all boxed and packed, and it's all come together my lovelies, you have to wait no longer! 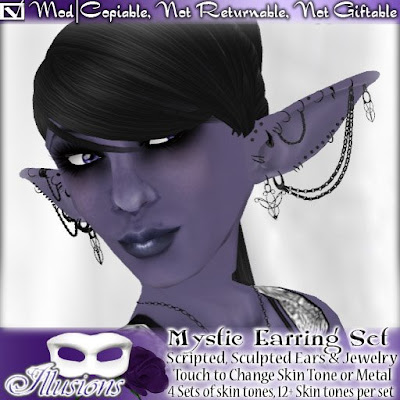 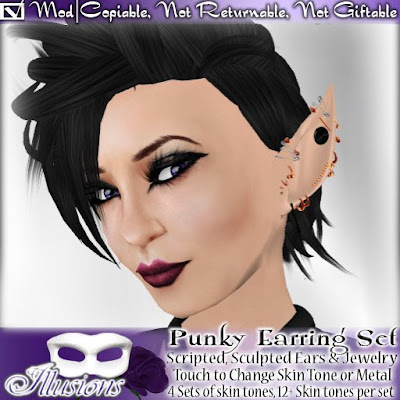 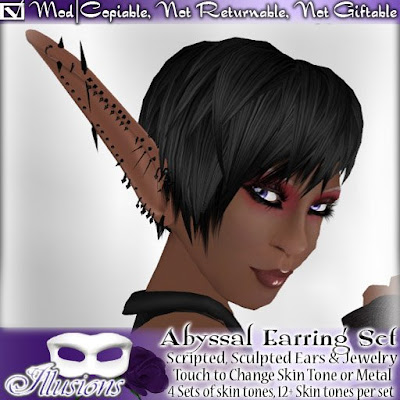 PIERCED EARS!! Yes, I heard your cries. They are all skin tone or metal change on touch, and the earrings are built right into the ears. There are three different kinds of piercings, as you can see, one of each "mood" that I could think of. Naturally, my personal favorites are the Mystic set, but Colemarie is insane about the punky ones, and Selos is a fan of mixing them up! These have been in the works for no less than four months. They were put on hold for the longest time, because I didn't know how to wrap my head around multiple skin tones, multiple jewelry metals, and multiple ear types with possibly even multiple permissions. I realized scripts were the answer (thanks again Ziggy :D), and also realized that as a body part... they don't really have to be transferable. I mean, second hand ears? Kinda weird...

But anyway. As part of my ear rejuvenation project, I realized I could sneak in a couple of extra fun things as well. How about cute little elfy fairy ears? 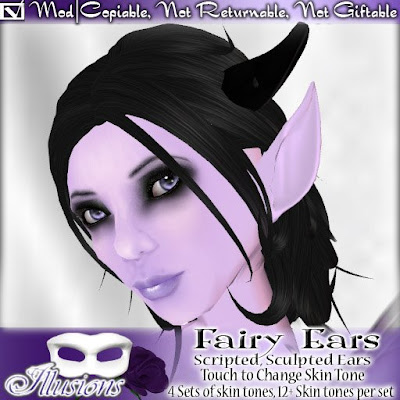 AAAAH SO CUTE AND PURPLE!! These are really my favorite shape and size for casual wear. Even with long hair, they poke so sweetly out and remind people you're not of this world. However, if you're not one for subtlety, there's always these: 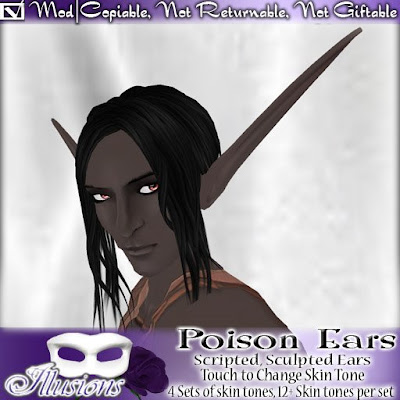 Can't afford satellite or direct TV? Not a problem anymore with these. Seriously. They're named after the graphic novels called "Poison Elves" that Munchflower was kind enough to tell me about (and ask me to make back when she made her ltd ed character series), where the elves all have the most ridiculous, anatomically incorrect gravity defying head appendages. Now, you can join them. I tell ya, they look pretty awesome all done up in the earrings too, haha!

Instead of only two different sets of skin tones (18 total, drows and naturals), there are now over 60 different skin tones, in four different groups. Again, a set of naturals (12 now), a set of Drow tones (24 now!!), and a set especially made for Nomine's new Windlight Aether skins (insert shameless plug), and Selos Dae's elven skins (insert another shameless plug). After all, it was Selos who was kind enough to do the soft, silky skin texture for these ears. /end pimpage.

The drow tones especially I'm very proud of, as they cover Nomine, Fleur, Adam and Eve, Body Politik, Panjen (most of her tones), Sin Skins, E's, and Fallen Gods. Take THAT.

And again, with the other ears, you can send in an ear tone request and get a custom skin tone for just 50L :)

I just had to comment.. these are freakin' unbelievably fantastic!! Your work is amazing! ^^