It's funny how sometimes a little light bulb will go on for a problem that was long mustering in your head without solution, and suddenly illuminate the obvious and perfect answer. I can't tell you how long I've chewed over how to do this next mask in the best way, but suddenly I knew exactly how to do it. 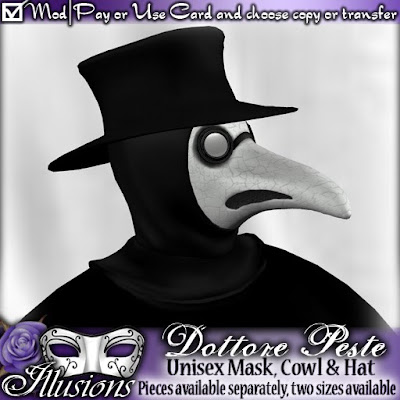 The Plague Doctor has been one of my longest standing requests, and for such a long time I was sure that it would have to wait until mesh import. However, the lightbulb that went on was that I don't need to have holes through it, or just black on a solid sculpt like Aragane Nishi's version. The original Plague Doctors in the 14th century would completely seal themselves, with oil cloth robes and glass lenses over the eyes of their masks. It was so obvious!

Why a bird mask, you might wonder? In the era of the black death, they thought that disease was caused by "bad air". So, the bird shaped beak acted as a primitive gas mask. They would stuff the tip with herbs, amber and other sweet smelling things to filter the air, and wrap themselves in oil cloth and waxed robes to keep the disease out. They were valued highly, to the point that they were sometimes kidnapped and ransomed. Over time, the mask lost its "practical" use and became more symbolic, and is now a traditional Venetian carnival mask.