I'm trying to hard to get into the spirit of the season, but my muse is like a hyperactive St Bernard and I'm just trying to keep her on a leash, much less going the right direction.

Yesterday I did have success in reeling her in and I worked on some adorable curly toed elf shoes. 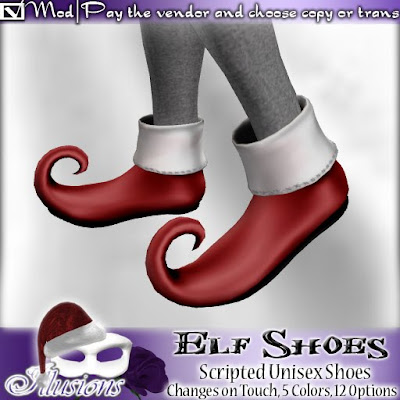 These are the perfect things to wear with tights or silly pants. They're unisex so they can be worn by both men and women, and they change texture to five different colors, and twelve different options total. There's a nice minty green, an icey blue, white, black, and the red that's shown. Each of the colors comes with the option for a white cuff or a colored cuff, and it's really fun to alternate them especially if you have parti-colored tights!

I adore curly toed shoes in real life, and making these was so much fun I think I'll be making more in the future (and in more colors).


For more general updates, I've updated the prices on miscellaneous older items throughout the store. I've also added scripts to the old Phoenix and Seraphim masks so there's no more need for fatpacks.

Also, the thing my muse keeps wanting to run off on is the new event hall build. So far its coming along beautifully, and things might be changing around the sim suddenly. The store probably won't be touched but the old event hall might not be here very long >.>
at 8:24 PM