See How High She Flies!

I've just completed some fabulous new witchy hats just in time for Halloween! I released them last night, but some technical issues with blogger had me hung up, posting-wise. They shouldn't have taken me so long, my RL has been so darned eventful (in a good way!) I haven't been able to focus on buckling down and just working on these. This week I forcefully made some time, and finally finished these troublesome chapeaus.


I like the name my witchy hats after famous witches, and in this case I've named them after the infamous trio in Terry Pratchett's Discworld novels. 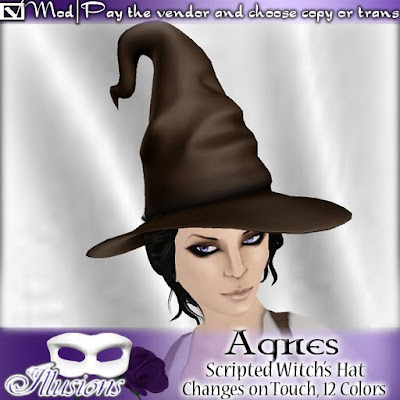 Agnes is a rather plain girl, very sensible but she longs for a mystical life with candles and seances and love potions. This hat has an eldrytch sense of age to it, maybe a bit musty, and is certainly perfect for witches and wizards alike. If you're thinking of going for a costume from the Harry Potter-verse, this would be perfect.

Like pretty much everything I make these days, it's scripted to change texture on touch to twelve different colors. Included are black, gray, white, brown, red, orange, yellow, green, cyan, blue, purple and a soft pink.

If it's a little simple for you, this one is my favorite of the three: 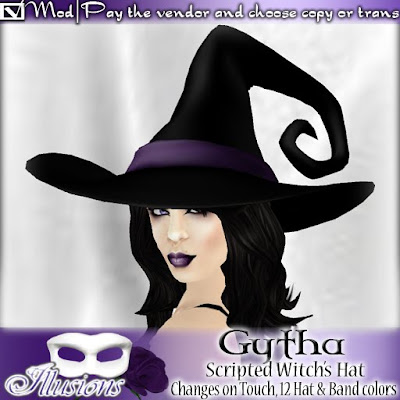 Gytha is playful, wise, charming and drunkenly hilarious. The name might not fit so well, considering the Tim Burtonesque curl and the stylized shape, but when I thought about it Gytha would certainly be fabulous enough to wear this hat. She would also be able to fit a good sized kitten under it, as she often does.

Also, I just wanted to mention that I'm well aware that my friend Allegory just released a similar hat, and before anyone tries to call foul I think we'd both just like to say that great minds think alike :) We both worked independently on them and we're quite okay with our respective hats peacefully coexisting. Hers have some very playful colorations too, so if you're in the mood for orange and green stripes or something you're welcome to take a look.


The last hat was named after my favorite witch, Esme Weatherwax. 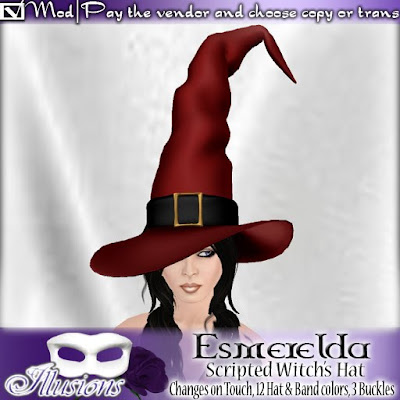 An utterly practical witch, Granny Weatherwax is a clever and no-nonsense force of nature. She won't give people what they want, she'll give them what they need. She has a commanding presence and seems taller than she actually is... could it be the hat?

I had to stretch the demo frame on this one higher than ever, you'll be tickling the rafters on this one! Like the other hats the band and hat have the same 12 colors, but on this one the buckle changes as well, to your choice of silver, gold, or tarnished black.

Now please excuse me, I must attune my Botanical crystals to the leylines of the sim. The sun is coming into trine with the Star of Neko and the constellation Freenis.
at 7:28 PM