Just in time for Halloween! I've been working like a mad woman preparing for the Masque of the Dead, as well as trying to get just one last release out before the big day. I certainly seem to be in a Terry Pratchett mindset, so I figured I'd just embrace it for this mask. 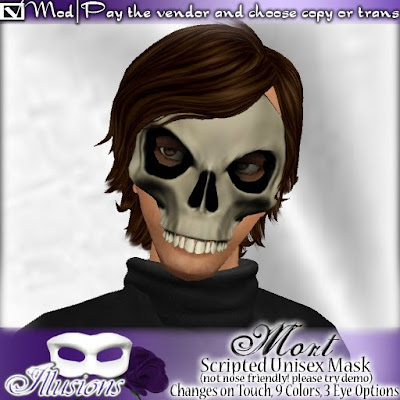 Back when I had my tiny mask store in the sky (in the mainland sim of Plio) I had a big collection of skully things. I had scythes, masks, capes etc, and when I retired them they were missed. I've made a couple of attempts to make skulls since then but now I feel I've learned enough and pushed myself far enough to make something I'm happy with.

It's unisex, so it looks great on both men and women, but it's not very nose friendly. Due to the nature of the nose, I couldn't bring it out much farther without it not looking right. I did the best I could, but ye of the pointy shnozzles might want to try the demo first, and make sure your shape is mod.

It's texture change and changes to nine colors, which are a somewhat different array of colors than my usual jewel tones. They include classic black, white, bone (shown) and red, but also a more adventurous variety of old bronze. My favorite is the black and white: 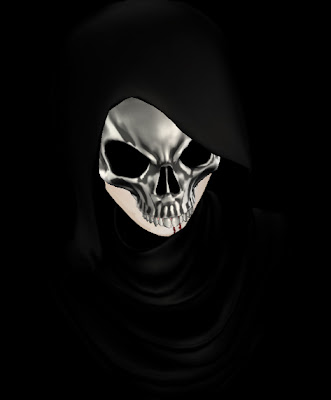 Weeeeeeeee! You got it done! It looks faaaaaaabulous darling!