Yesterday I was busy with my RL Valentine's Day, but I still made sure I took the time to make up a goodie. I had a couple of projects with a heart theme from Shir Dryke's fundraiser, but they met their goal before I was able to work out the kinks and then I ended up dropping it. I thought of just sending those out but they were very much female oriented, and the guys in Masqueraderie would have just had to delete it. So I worked on a possibly familiar face to make sure everyone would have someone to snuggle. 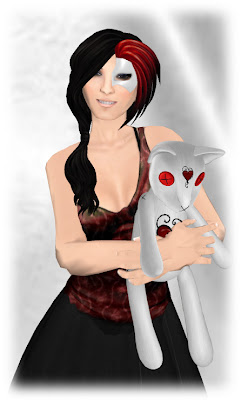 I remade my stuffed kitty plushy in a new and more cuddlable than ever incarnation. This one is decorated with an old experiment when I was first trying out oblong sculpts, and it didn't turn out well enough to sell as jewelry but is absolutely perfect for decorating a stuffed kitty.

You can fish him out of the notices of Masqueraderie for the next thirteen days :)

There will be a black one too of course, who will be one of my new freebies when my store reopens after the sim has been rebuilt! Still not sure when that is going to be, but it does look like the Mardi Gras Masquerade will be the last party I hold in the current event hall.
at 4:55 PM