I've been blogged! The Fabulous and rather Infamous Swirly showed up on my radar the other day, and as predicted by this certain distinctive lady's style she proceeded to purchase my most modest, understated, and subtle pieces. Well needless to say she had a lot of fun dressing up and being even more fabulous, and she gave me a shining review and included the lovely new Eliza :) Which quite simply makes everyone look incredible (if you have the personality to pull it off ;)


I have also welcomed a new addition to the Isle of Carnivale, and it is officially the first thing that has become part of the landscape that is not hand crafted by yours truly. Although I've modded it to the point that that is a rather fluid concept and might not be true anymore. The incomparable shipwright Kyom Kyom (can't remember the last name) has scripted, static pirate ships topping 900 prims for sale at his store for a ridiculously cheap 800-1000L, and since I've been calling myself Captain Siyu I figured I'd make that a fact. I bought the "Blackbeard" pirate ship and then proceeded to make it siyulicious and painstakingly elegant. I tore it apart, retextured it, and then slapped it back together again to make it utterly perfect and at home on Carnivale. I've been having so much fun making the cannons go *BOOM* and playing around with the battoning down the hatches while listening to the gentle creak of the sea playing with the floor boards. I have dubbed the bonny lass the Indigo Rose, and it be a fine name indeed. I even be havin' me own pirate flag, which I be showin' off in me own piratey glory in these fine piccy-tures! 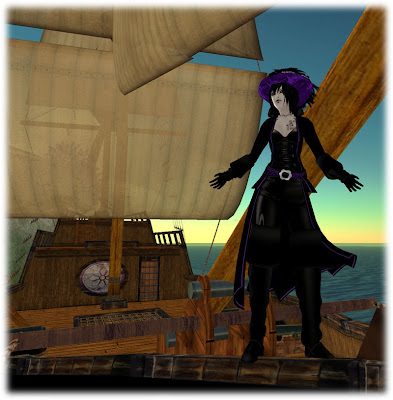 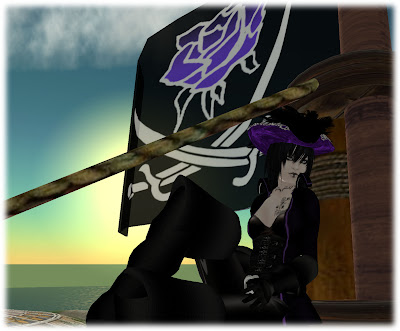 And speaking of pictures, I have posted a few of the pictures from the Midsummer Masquerade on Flickr, which can be found here. I'll be posted the best ones from the farther back shots, but those are just some of the absolutely outstanding costumes, and there'll be more coming soon :)
at 7:34 AM