Terry Toland approached me during my commission drive with a request for something more on the historical side than the fantastical.  She's been a long time customer and had a hankering to accessorize the look of Tudor nobility. 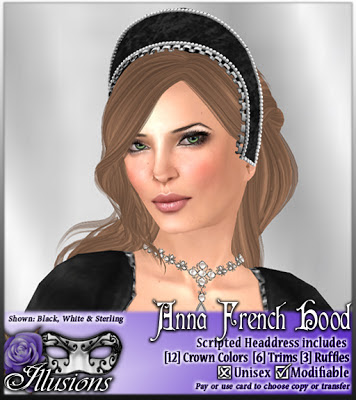 The Anna French Hood is inspired by the fashion that the young queen Anne Boleyn brought to England from France.  A veil or coif worn with a decorative clip to hold it in place became far more fashionable than the square "gable hoods" that were all the rage.  Despite her unfortunate fate, the hood caught on and was worn by most noble young ladies.  Pearls and ruffles and rich fabrics were typical decor for them, and some were even ornamented enough to be fit for a queen. 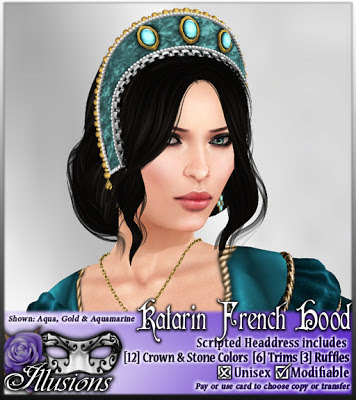 Katarin is the "deluxe" version, with dramatic stones set in the center and an outer trim with delicate pearl droplets at the ends.  Both hoods have full customization of course, and allow you to change the base color of the crown to twelve different colors, the ruffles have three options, and the inner and outer trim have six options each.  The stones come with the same selection of twelve colors as Nevina jewelry.

Hopefully these will be the perfect addition to your historical garb or roleplay!

Out now at the store

And on the marketplace: