Grant Kirax approached me earlier this month during my commissions drive, asking if I could make him a custom sword.  He showered me with concept photos, picking and mixing his favorite aspects of each until I came up with my own concept of how to integrate his ideas.

He wanted an elegant great sword, with a winged crossguard and a wolf head pommel, and so this is what I put together:

The carved wolf head, I decided, would be a custom pommel specific to his sword.  I wanted to keep the wing motif through-out, so I swapped out the wolf with one that matched the crossguard. 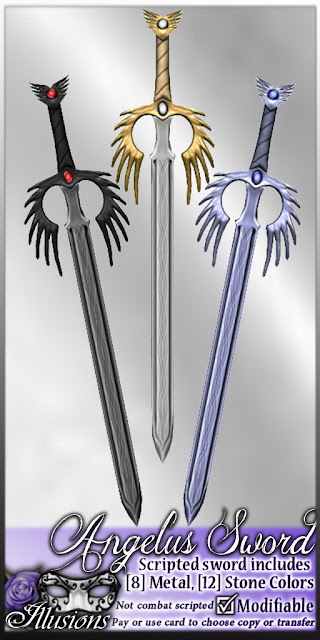 The Angelus sword is one of the first weapons I've ever done, and I get the feeling that now that it's out I will end up being coerced into making more. I haven't done weapons in the past, simply because I've had no desire to script them and a certain lack of inspiration for them, but this one turned out beautifully.  I may end up having to get inspired.

One thing that should be noted is that it's not combat scripted, or animated, but it is modifiable so you can add your own scripts or adjust its size to your avatar.

It has eight metal color options, including black, gunmetal, silver, gold, copper, bronze, and an aqua and a periwinkle color I've called ice and storm respectively.  It also shares the gem selection from the Nevina Jewelry.  The combinations are lucious and elegant, and make this sword perfect for both seraphim and fallen angels.

Beautiful swords, I think I might get one of these for my angel avatars!