I've been busy working on something exciting for Fantasy Faire (coming up April 21st - 29th), which distracted me from finishing and releasing a couple more mesh masks. I meant to get these out shortly after the Volto Altezza and Altezzoso, but better late than never!

There are some beautifully painted volto masks out there in the real world, with elegant patterns and creative looks, but all of them start with a simple white mask. That's what I found myself with, and so I set to work playing with designs. I did my own take on some classics, and invented some entirely new ones too. 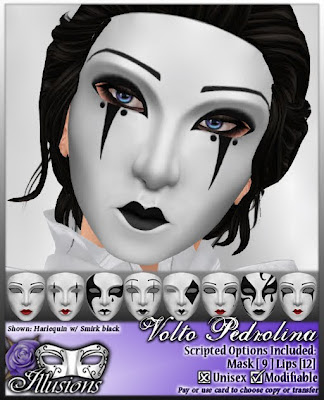 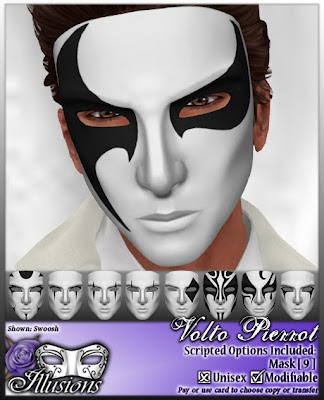 Pierrot, as a Commedia Dell'Arte character, was a sad clown. He was the lovelorn and naive innocent who pines with unrequited love. Traditionally dressed all in white with black, his was a human face with either white makeup or a human mask. His character was more human, he was an underdog and had more flexibility than others who had set roles. One day he would be a tragic patsy, the next a crucial catalyst of action. But, he was always in black and white.

This let me play quite a bit with patterns, especially with the male version. I admit I got a little carried away, the "Tribal" and "Noh" patterns you see in the male previews (lets just say the spiky one and the dramatic one) are my having a bit of fun. The female version features changing lips, in six different patterns with a black and red option for each. It's a lot of fun mixing and matching the different patterns with the different lip styles, and it changes the attitude of the pattern entirely.

Speaking of which, for a mask like this I'm so glad I have a bit of extra space in my vendor images now. It allows you to see the various patterns at a glance when its more than just a recolor, so that even if the one the model is wearing doesn't catch your eye, one of the other patterns just might.