I realize that I haven't released something in a while now. I had a mesh project in the works for all of December, I had hoped to complete it by Christmas and just ran into too many problems. That didn't stop me from sending out a holiday hat though! 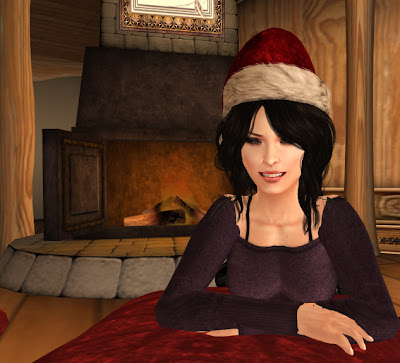 I hope you all had a wonderful Christmas, spent with family and friends. I decided at the 11th hour to just let it go, and enjoy the holiday without stressing over releasing it. Unfortunately, that mesh project is not the only one I've run into trouble with since then, and right now I have multiple projects in varying states of completion. That's usually how things are, but even then I usually release something in the meantime.

Since it's now creeping into January, my silent shame of incompletion has come to the point where I feel I have to address it. If you worried that I was sick or at all unwell, I'm alright! I'm just taking to mesh very slowly, and my progress was not at all helped by Skyrim or Assassin's Creed, or the holiday itself.

I have set a goal for myself to get a good selection of mesh masks released in time for Mardi Gras. I'm hoping you'll see a nice steady influx of new things as I get better and adjust to my new workflow. Expect to see some classical Venetian masks coming soon!
at 11:45 PM

my progress was not at all helped by Skyrim

Have you come across any of the lich masks in that game? I think there's a whole quest around them. I actually found myself wishing they'd gotten you to design them.

@Setsuled Thank you! Yes I have, I ended up collecting them and was a bit disappointed that they were all the same face in different colors (except one).

Certainly if I'd designed them, they'd have a black hood. Jeez, don't they know brown is so 3rd era?

Sounds like you've seen more of those lich masks than I have. I only just started a magic using character--the masks weren't very useful to my first two characters.

I rather wish you'd designed the Masque of Clavicus Vile, too, come to think of it, going back to Morrowind. Though maybe there's a sort of joke in that the mask that makes you more attractive to NPCs is actually pretty unattractive. Anyway, I wish they'd spelled it "mask".

I hope his campaign continue down the road net positive as possible and have many partners, go ahead and have a lot of luck with your campaign mesh masks for the name and its explanation has me pretty good.
If this is your first campaign and I hope you succeed because if you already have experience and will come out splendidly all great!
A greeting
Roci.