There was once a crow, who lived in the woods near a road. She would sometimes follow travelers and see if they dropped food, or perhaps left an unattended piece of sparkly for her to add to her collection. One day, she saw a nobleman in fine clothes lead his horse mistakenly off the path. She followed above in the trees as he quickly became lost. She watched him as he tried to find his way back to the road, and she took pity on him. Alighting in front of him she cawed with her hoarse voice, and started to fly back towards the road. 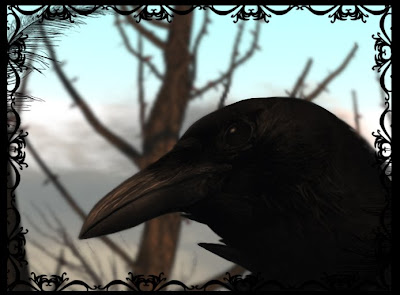 He followed her as she flew from branch to branch, and before long he was leading his horse back onto packed dirt. He smiled kindly, and thanked her and offered some of the sweet bread he had with him. She took it happily and flew away.

She found herself thinking of the encounter and how kind the man had been to trust her and share his bread. She found herself daydreaming of perhaps meeting him again and taking his hand. She dreamed of him leading her in a graceful dance like flying on the ground.

Her thoughts were interrupted suddenly as she felt a net fall about her, she struggled but found herself trapped. She cried out in distress as she recognized the witch who lived nearby as her captor. The witch leaned in and said "I only need one of your lovely black feathers, dear, no harm will come to you". The crow was relieved, but it hardly seemed fair... she loved her feathers. "You can't just take it," she said, "you should offer me something in return." The witch was taken aback, but asked her what she might want. The crow thought quickly, and realized her chance. "Make me human, so that I may meet the nobleman who was kind to me and dance with him." The witch smiled in a way that made the crow's heart tighten, but she soon said "So be it. You may dance, but only with him, and you must not act like what you truly are or my spell will weaken. Do not take anything that sparkles, and do not eat other's food. If you do these things, my magic will not be able to keep you from returning to your true self".

The crow was delighted, and let the witch take the feather. She felt herself begin to change, her wings becoming smooth arms and her rough black feet becoming long graceful legs. Her beautiful feathers became an elegant gown, her tail its bustle. She reached up to touch her soft face, her hair, and smiled for the first time. Laughing with her now musical voice, she thanked the witch and ran to the road, to follow it to the nobleman's manor. 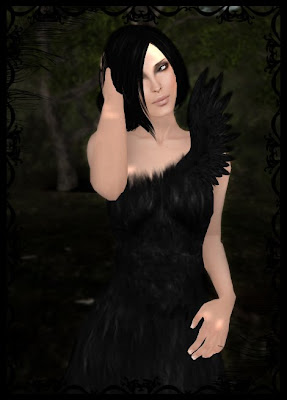 When she arrived, her fine clothes and dark beauty earned her entrance, for a party was underway. Dancers and colorfully dressed guests swirled about and she was entranced. Such colors, such jewels, and such food! The sights and sounds overwhelmed her, but she had her eye out for her nobleman. Across the room, he had noticed her in her dark dress, and he quickly made his way to her. He introduced himself and offered her wine. Afraid to turn down his kindness, she accepted and took a sip. She felt an itch at her arm, and looked down to find a few black feathers. He did not notice, and he offered her his hand to dance. This is what she had been hoping for, and as she danced it felt like flying. She laughed and grinned and the nobleman was enchanted. 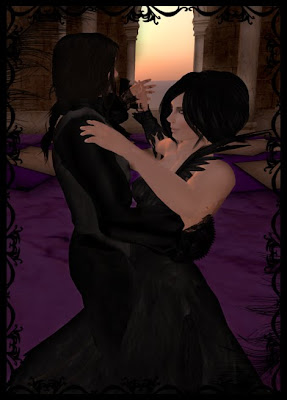 He had been hoping to find a bride this night and he felt he might have found her. He needed his father's approval, and so when the song ended, he took her to introduce them. When he told his father she might be his bride, her heart leaped with joy. His father was happy to meet her, and invited her to dance. So close to what she wanted, she hoped that the magic would hold enough to allow her to perhaps garner his blessing. She took his hand to dance, but felt her shoulders ache as wings unfolded from her back. Fitting so well with her gown, a few guests admired the ingenuity of her costume.

Once their dance was ended, his father gave his blessing. The party came to a slow as the steward called for silence. Excited and nervous, she followed her nobleman to the end of the hall. He turned, knelt, and pulled something sparkly from his pocket. All at once she was elated and jubilant as she looked down at the beautiful, shining ring. She sobered as she realized the choice she had in front of her, she couldn't know how close she was to breaking the spell. She looked into his eyes, saw the sincerity and hope inside them, and felt herself reach out to accept it.

She felt her hair becoming feathers, the dress becoming her skin. She turned away quickly, tears in her eyes as she fled from the grand hall. As she ran she felt her legs growing shorter, her wings returning and so she flew. 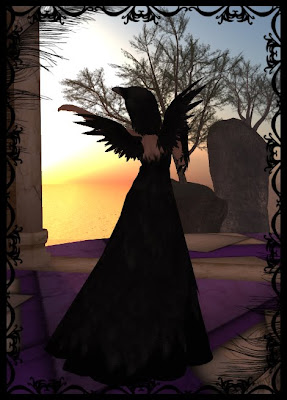 The spell had been broken, and she had lost her chance to be with her nobleman. She flew back to the woods in despair.
The nobleman felt that there was something wrong, and went to follow her. A trail of black feathers led out and to the road, and he saddled his horse and rode to follow it. Riding into the night, he hoped to encounter her. As it was getting dark, he slowed his horse, and saw a light in the distance. Hoping to find his love, he rode up to the cottage of the witch.
The witch heard him, and came out to meet him as he approached in his finery, holding black feathers. He asked her if she had seen a beautiful woman pass, and the witch immediately knew what had happened. "Do you love her?" she asked.
"I was going to marry her, we were to spend our lives together." he replied. The witch nodded, and asked him what he would give to be with her, would he give up his fine clothes? His home? "Everything" was his answer. The witch smiled, and took one of the feathers he was holding. He felt himself shrinking, his arms lengthening, his skin prickling as feathers grew. And as he changed, he saw a familiar crow come swooping down to meet him, and he flew for the first time to dance with her in the sky. 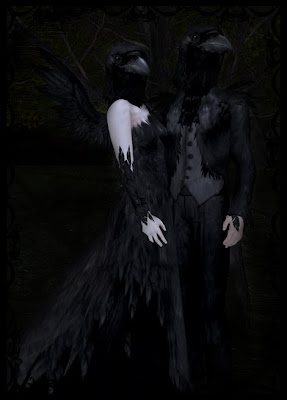 Introducing Corvus, a hauntingly beautiful matched set of a mask, wings, gown and suit. More details to follow... but they are out now in the store :)

What an enchanting, heart aching story! But crows are loyal, life-bonded creatures so I know they will be happy together.