I've decided to try out participating in one of those new fangled hunt thingers you young people are always yammering on about. And I'm jumping in with both feet, since the SAH is HYOOOGE! Or at least it is to me, apparently some jaded and delusional folks are saying it's a "modest" hunt with a mere 164 stores participating.

I'm not sure what I can expect from this considering I'm store #150, and I personally can't imagine anyone actually going to every single store and wanting to spend time at them. So I guess I have to set out a particularly appetizing gift to get people in here! 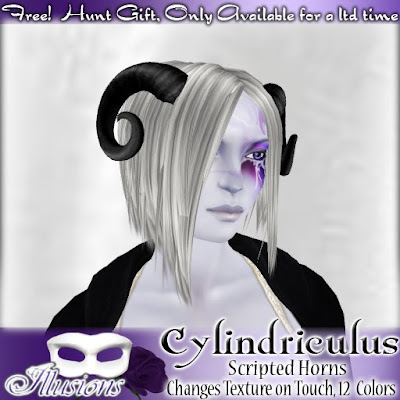 I made some cute little ram's horns, and I've been wearing them around for a week or so now. They didn't fit in with my ridged horn release so I've decided to let you guys have them. Even if you don't feel like doing the hunt, this one is on me guys :)

Now you just have to find them! They'll be hidden inside an alpha picture of a yellow boot. The clue I gave the hunt coordinators was this: "Someone was climbing on the columns". I tried so hard to think of something more clever and romantic (oo a haiku! or maybe a sonnet!) but my hiding spot is so unremarkable the wellspring of my poetic mind ran dry from boredom. So I guess if you're reading this you get an extra clue!
at 3:35 AM

where did you get that cool skin?? I like! :)
lorelei

It was a group gift from TRAP :) Selos Dae sent it out in her update group, I'm not sure if its still available but its worth asking her!