Welcome to a New Build :)

Some people have been wondering if the store is open again, and the answer is yes! I've been on a slightly "soft" opening while I work out issues with my vendors. The thing is, there have been some technical difficulties and I was hoping to have them resolved before I posted about the sim, but no such luck.

It's not the grand opening I was hoping for, with a big unveiling of a whole new look with a whole new card system. Of course since the actual building process went so well, fate wanted to make sure I knew I was her bitch and so decided to throw other things at me to show me that no, you can't plan for everything. The card system is still down, but being worked on, and some of my vendors are missing due to a very obscure SL security measure that's made me unable to rez them. I have a ticket open and I'm still waiting for a resolution, I'm really hoping that they'll be able to help but if not, I will have to redo them. Some of the vendors are still a bit screwy, so please bear with me while I iron out the kinks.

Anyway, I'm focusing on the bad things when the truth is I have a beautiful new store that I feel is well designed, will be easily expandable, and reflects what I'm capable of as a builder. It also makes a hell of a picture. 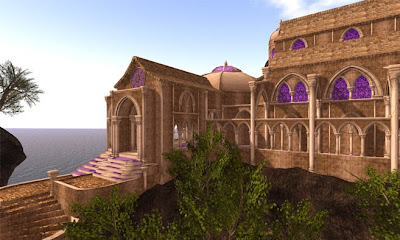 I'm planning on holding a Flickr contest soon, so you guys can enjoy some of the views and details I've pored over for the past months. I'm planning on making the price one of my new gift cards, so when the system is up and running I'll announce it officially. Until then, come visit and see the pretty :)