For a little while now I've been so quiet because I've been working on a new store build. I finally solidified a plan, and after plenty of "inspiration time" playing Assassin's Creed 2 (the game was frickin' made for me! love love love it) I sat down and carved out what had been forming in my imagination.

I have a big thing for cathedrals, grand open spaces, decadent and detailed architecture and floating high arches. I've been paying a lot of attention to what exactly it is about these things that I admire, picking and choosing my favorite elements and assembling them into a carefully planned pile of loveliness.

I'm still working on some holes, filling in the edges, finalizing and problem solving with some tricky areas but the current store build's days are numbered. It's been around since 2007, and has served me well for almost three years. It actually isn't that badly made, I have to say I've stayed pretty happy with the construction, but it has its issues and it's gotten to the point where I've let the walls get rather crowded. Soo... it's either bring out the scythe again and cull the herd of my creations or make a new, easily expandable and decadent store build. If you've visited the new event hall, you might have an idea of what sort of thing to expect. But it's even prettier than that. 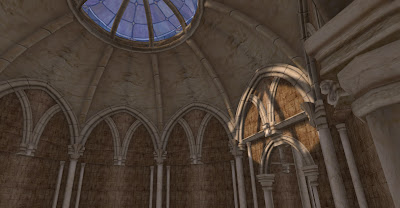 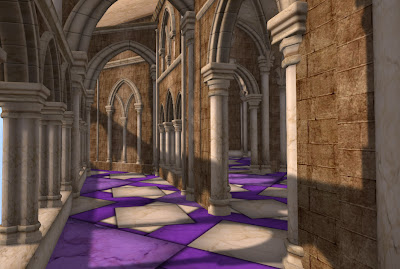 Taken with the new 2.0 viewer with shadows enabled for maximum awesomeness
Several months and over a year of mental planning well spent, right? :D

I'm not sure when I'll be making the switch, I won't be able to get on for a week after this Saturday. I also intend to change to the new branding on all of my vendors for a unified look, as well as finally switch over some of the older scripts and update the pricing on some older items to reflect their age. It's the all around sprucing up and house cleaning I've been putting off for over a year!

I'll keep you guys posted on an actual day and of course a grand unveiling, but for now, just know it's coming... eventually.
at 2:46 AM

I *loved* Assassin's Creed 2. The history, the architecture, the clothes!

When the main story was done I still spent an inordinate amount of time just looking for the remaining feathers. I didn't mind...I loved just walking (and climbing) throughout the cities :)

Looking forward to seeing the new store...is it part of the new island your are building?

Oh god the details they put into that game, they did so much research, down to the plague doctor's waxed coat and the peasants wearing an older style of clothes than the nobility. I couldn't stop myself from ooh'ing and aah'ing over every little thing and driving my man crazy. And Carnivale! Aaah! It took me so long to move through that part of the game because I didn't want it to end :D

As for the sim, yes it eventually will be, but I realized I would just take far too long with the rest of the build and I need a new store before I release anything there, it's just way too crowded and I don't have any space to move the things on the new releases wall out where they belong. I'm still going to reshape the island while I'm at it, I'm just going to leave a lot of the stuff to the west as it is for now.

it will be awesome regardless of whatever you do.