Before I requested commissions, I was slowly plodding along with work on a new piece of jewelry.  Mesh is fantastic for jewelry, as it is for just about anything wearable.  However, the stones I've used in the past for my other jewelry seem a little outdated to me, so I decided to make an entirely new set.

I'm particularly proud of them, because unlike past jewelry stones I've made, I made them without any sort of leaning on Zbrush matcaps.  With my other stones, I would basically bake the texture of a Zbrush material and modify it, while in this case I started with a red circle, and after a lot of playing with gradients and blending layers, ended up with a gem.

My friend doodles celtic knots, and he came up with one that I particularly liked.  I thought that with a few adaptations it'd make a really lovely pendant. 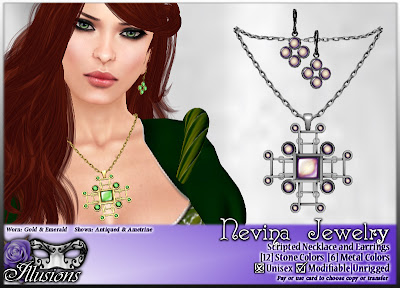 Nevina is gaelic for "worshipper of the saints", which I found fitting for a Celtic cross necklace.  It's unrigged for easy modification, and the pendant is a separate object so you can adjust the angle or size for a perfect fit.  On one hand, it seems like something from the middle ages, on the other, it's modern enough to be timeless.

Currently available at my stall at the Fantasy Faire!   After the fair is over, they will be moved to the store on Carnivale and listed on the marketplace. 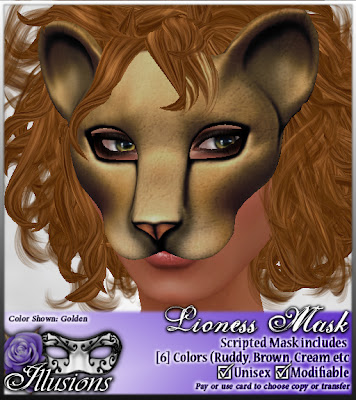 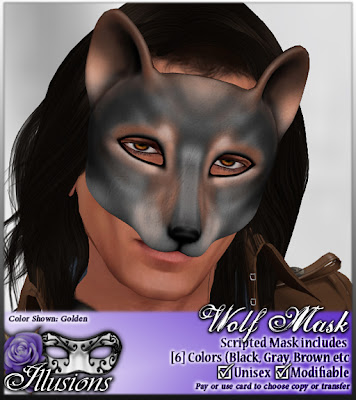 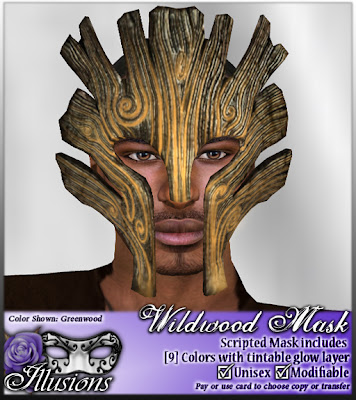 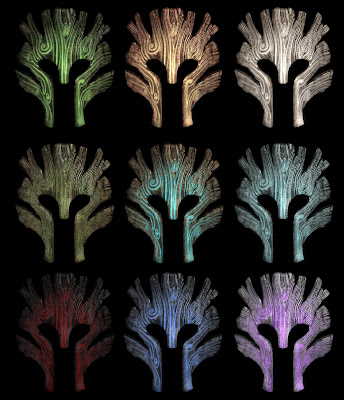 These masks are currently only available at my stall at Fantasy Faire!   After the fair is over, they will be moved to the store on Carnivale and listed on the marketplace.  But don't miss the faire, if you only go to one expo all year, make it this one!
at 8:17 PM No comments: Once again, Fantasy Faire has come around, and this year Illusions can be found on the Evensong sim.  Fantasy Faire opens at 6am on Saturday, the 20th so come visit!

With all of the commissions I've been working on, I realize I probably should have worked on more things to completion rather than starting almost everything and ending up with most things 20%-60% done.  I think I was a bit too optimistic to think I could get multiple projects done by FF, so I'll be completing some more over the week that Fantasy Faire runs but more will probably be coming afterwards too.

I've put out a couple of new masks, but I'm going to start with my items for RFL.  Once again, Fantasy Faire is associated with Relay For Life in raising money for the American Cancer society, and we creators were asked to donate two items.

One of the commissions I accepted was one from Dream Resistance, who requested a trio of animal masks, all made to look as if they were made of leather.  One of the ones she requested was a sparrow, which seemed to me a perfect offering for RFL. 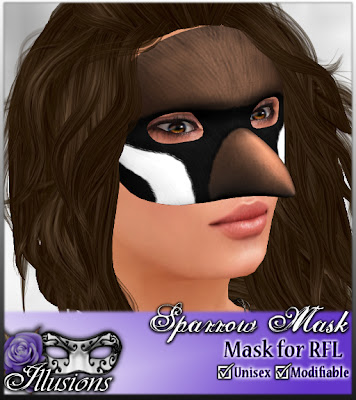 Since I'm such a fan of black and white, I decided to do another coloring of it for my second RFL mask.  I recolored it as a black-capped chickadee, a bird I remember from my childhood. 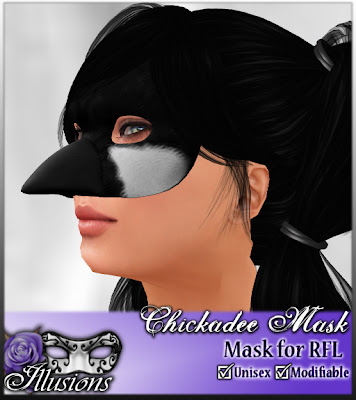 Both of them are available in the RFL vendors at my stall on Evensong for just a 100L donation to the American Cancer Society, but of course if you wish to give more, that's up to you!

If you follow my Plurk this may be old news, but I've found myself in a bit of a financial pickle.  I had a rather sizable bill arrive near the end of March which perfectly bit a chunk out of the money I had set aside for rent on my apartment.  Unfortunately, working on Second Life for a living, I live just barely within my means and so my savings go just as soon as they come.  I doubt my lack of activity had nothing to do with my current predicament, either.

I'm far too stubborn and aware of my own part in my situation to actually come out and ask for help, but what I could use is work.  Fantasy Faire is coming up and while I had my own list of things I had in mind to make,  I'm putting out the call to you.  If you have a bit of disposable income, or perhaps some lindens lying around, please hire me!  Is there something you've had in mind for a while that you'd like to see made?  Maybe you even sent me a suggestion ages ago, and I never got around to making it?  This is your chance to have it become real, or as real as Second Life gets.  I'm looking for around 10,000L-20,0000L per project, or less if it's a something small or simple.  Please, do contact me to talk about ideas, how you visualize your project and what your budget is and hopefully I can make you something.

Some people have already stepped forward and hired me, and I've made solid starts on three projects already, but I still need to raise about $200USD more and more is always better.  I've set up a double points sale at the store, so that all purchases made with an Angel Card from now until Friday evening will grant 20% of the value back as store credit.  If you already have everything you could want from the store and you insist on supporting me in your own, incredibly sweet, stubborn and generous way, maybe purchase a points pack or two and use those points later.  Consider it a loan, and every little bit really does add up.  Hell, that's how I make my living.


Update: I've made my goal!  Thank you so much to everyone who swung by the shop or ordered something or bought something on the marketplace, I'm now in the clear and should be good for another month.   Plus, I have so many goodies for Fantasy Faire now!  The double points sale will continue until Friday evening.
at 8:29 PM No comments: